I had nothing in my mind when I tossed this topic into the pile for the LBC, a very long time ago.

Sitting tapping my fingers on the edge of the keyboard hoping for inspiration to strike, a couple of words from a song came into my head and there they stuck like sh*t to a blanket.  Nothing would shift them. 🙁

‘Nothing comes from nothing
Nothing ever could….’

With them I was back in the year 1966, sitting in the Savoy Cinema, on O’Connell Street in Dublin, with all my siblings and my parents watching The Sound of Music.  It was the first time any of us had seen a film on a wide screen.  The occasion was a late celebration of the 25th Wedding Anniversary for our parents and it was to be followed by dinner in the Gresham Hotel, a couple of doors away.  But I have gone off on a tangent…

“What have you got there?”  was the question that caused me to hesitate in my tracks as I ran down the garden.

“Nothing.” I replied without turning, holding tightly to my oversized jumper.

I was on a mission and I needed to keep going as fast as my little legs would carry me.

I didn’t actually find what I needed on my fast foray to the kitchen.  A hand or tea towel would be missed and anyway I would never get rid of the evidence.  Never stuck, in time of need, my solution was stuffed up my jersey!

I was actually surprised that there was no noise coming from the area where I was headed.  At my tender age, it did not ring any alarm bells for me.  In my book at that time, the less said the sooner mended.

You see, it was not really my fault.  SERIOUSLY.

There was nobody in front of me when I lifted the triangular headed hoe above my head.  I needed a good sharp blow to make a cut in the hard compacted soil that I wanted to clear.  My younger brothers were well behind me and I had told them to stay there.  That of course was as silly an idea as hoping a dropped slice of jammy bread would land sticky side up as it reached terra firma.

I didn’t hear or see the youngest one move.  He was magically there as the hoe descended full force to land on his forehead.

I had accidently split my little brother’s head open with a garden hoe!

So, as I arrived on the scene of my crime there was blood streaming down his face.  I had seen blood before, and I knew what to do.  I needed to wipe it off and I was ready!

I produced a bundle of paper bags and proceeded to mop up the blood.

Yeah… for about two seconds, so I tried again.

“Holy Mother of all divine race horses; what is going on here?” It was mammy.  That sentence was not exactly what she said, but you get the idea.   I froze on the spot.  Partly with fear and partly with relief.  Not satisfied with my scurrying reply, she had come to investigate.

Mammy took in the situation quickly and called on a neighbour with a car to drive her to the local children’s hospital.  There were not many cars about on our avenue at that time, and daddy was at work.  She took my other brother with her…. I wonder why?  I was left in charge of the house in case anyone phoned.

The house was quiet at first, but then all the ghosts and devils of the Universe began to shout and taunt me for nearly killing my brother.  He could have been lying dead on a cold slab at that very moment for all I knew.  I couldn’t hack it any more…

I packed my bag and went in search of a new home.  There was no point in waiting until mammy came home and threw me out.

I left by the back door bag in hand, and walked slowly down the garden, dragging my feet with every step.  I crossed the fence to the house next door and asked our neighbour if I could live in her house!  She brought me in to sit by the fire and gave me a cup of tea.  She chatted away to me for quite some time.  Eventually mammy arrived to bring me home.

I wondered how mammy knew where I was?  Our neighbour had no phone, computers and  internet were unheard of then, never mind twitter; but those women had ways of communicating and they watched out for each other and all the children of the neighbourhood.  If any parent chastised us we took it on board, and in turn we could ask any of them for help.  There was no such thing as fear or inappropriate behaviour.  We were very fortunate.

Did you say something?

You want to know about my little brother?  Oh yes, his head healed, but he has never let me forget it.  Of all the four brothers, he is the only one to sport a monks haircut so the scar is visible every time I see him.  Mind you, that is usually on Skype.  He moved to Australia, well out of the reach of the garden hoe!

Some may be distracted by work, play, love and or family, so their post may be late in appearing.

I took my new camera for a walk in the park yesterday. 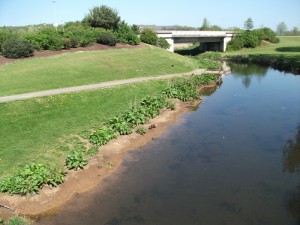 The river looked clear and calm. 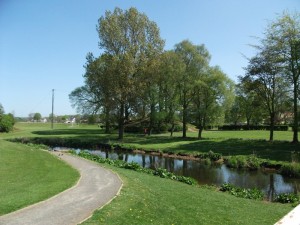 That is a Motte surrounded by trees. 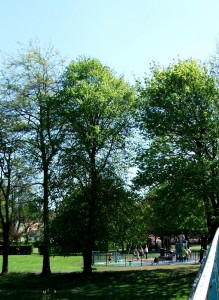 The new children’s playground with the damage free(for children) surface was being well used.  The swings, slides and climbing frames are all enclosed with a gated fence.  I was careful to take the photo from across the river so that there would be no objection from parents.

The camera is smaller than my last one, although from the same family:- FINEPIX J38.  In fact it is almost the size of my mobile phone!  It really does fit in the palm of my hand.  I saw it advertised in a Lidl Saturday Special sale, a few weeks ago, so I was there when the doors opened at 8am that day!