Our topic this week was chosen by Gaelikaa

Conflict causes heartache.  I avoid it where possible.

I am no coward, but I have seen the devastation that it can cause, and know families torn apart simply because they were going about their duty or in the wrong place at the wrong time.

In the last two weeks a warning from police in Northern Ireland about the rising threat from dissident republicans was a stark reminder of how much work still needs to be done in the peace process here.  The statement issued on Good Friday by the police (PSNI) in Belfast warned of a “severe threat posed by terrorists”.  The increase in dissident activity coincides with the Northern Ireland Assembly election (May 5th) campaign, preparations for this month’s first visit by the Queen to Ireland, and the summer Marching Season.    We also need to remember it is also part of the run up to 2016 the centenary of the 1916 Easter Rising.  Unfortunately it is not over by a longshot.

Family squabbles are nothing compared to that.  They are a waste of energy.  You can solve squabbles when people are alive, after that, all the ‘WHAT IFs’ or “I wishes” can never be sorted!

Some may be distracted by work, play, love and or family, so their post may be late in appearing. 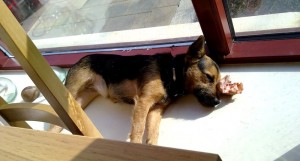 Buffy resting in the sunshine.  Chewing a bone is hard work!

I hope Miss Buffy is a good girl today and gives Elly a special Birthday lick!