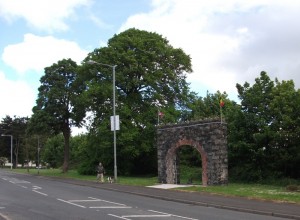 This Arch is at Prospect Road/Woodburn Road, one of the many routes that I can take on my way to Carrickfergus.  The original Prospect House was built for Alderman Henry Ellis some time before 1767 and was surrounded with ornamental grounds.  A listed building, it fell into disrepair, and in recent years was damaged by fire.   The land was cleared and modern houses were built on the site.

The portico is the only portion of the Henly Gate remaining.  It was erected in the 1920s as a 21st birthday present to Gwen Henly who was the last owner of Prospect House Estate.

During WWII Prospect House Estate was requisitioned for military use.

After the liberation of Belgium in late 1944, it was agreed that Belgium would raise 5 Infantry Brigades which were to be trained in Northern Ireland.  The 3rd Infantry Brigade ‘Rumbeke’ was posted to Northern Ireland from March 1945.  It was billeted around the northern shore of Belfast Lough.  The 2nd Battalion was located here at
Prospect House.  The Brigade trained for almost 6 months in this area before going on to take part in the occupation of Germany.

The other day I decided to stop my car and go take a closer look.  The man walking his dog in the photo above seemed to have the same idea. 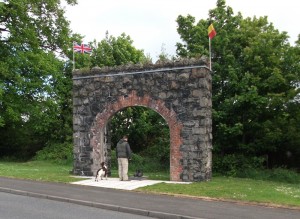 A memorial was dedicated by the Borough of Carrickfergus, on 5 November 2006 commemorating the presence of the Belgian army.

This is what drew me to the Arch 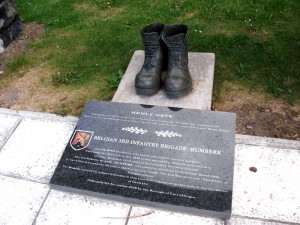 The Bronze sculpture is a pair of well worn boots. 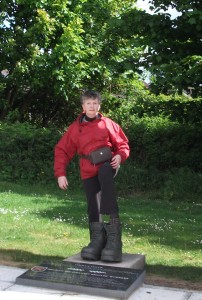 I would never be man woman enough to fill those boots!

I chatted to the young man in the photos above for quite some time and he offered to take my photo.

He was local to the area and his grandmother (now 90 years of age) had told him many tales of that time.  She had said that when the Belgians landed at the harbour in Carrickfergus they were found wandering through the streets, dazed, bedraggled and half starved.  Some had no boots, some had odd shoes and their their clothes were in tatters.  The local people dressed and fed them.

We have no conception of what life was like in WW1 or WW11.  Many a young man from Northern Ireland signed up and lied about his age – JUST TO GET A PAIR OF BOOTS!

That young man above told me he had joined the Royal Navy and served in the First Gulf War.  Why?  Simply because he could not get any other job at the time.  It makes me wonder….. how many of our young people are serving in war torn parts of the world, because they cannot find gainful employment at home on dry land?