Did you miss me?  I had a busy few days with family and friends.  It was fun.

One day was spent with three of my siblings recalling the times we all lived under the one roof….

Was that not just last year?

We headed to The National Botanic Gardens, where we had lunch and sauntered around the various sections of the grounds recalling the tastes & sounds that take each of us right back to that time long ago.  Details of events that each had a different memory of, and the silly things we discovered – like peony roses which three of us hated.  Peeling potatoes got several mentions. 😆

In the Sensory Garden designed by Joan Rogers in 2002, we sat and enjoyed the sunshine as one story led to another.  Suddenly a robin landed on the railing round the pond, and watched and twittered at us.  All four said in unison “That’s Dan’s Bird!”

Further along we found the fruit and vegetable garden.  Along one wall were Gooseberry bushes and just look at the effect that had on my siblings…. 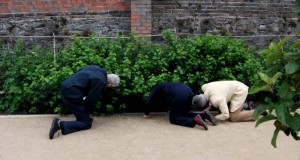 I bet Gooseberry bushes never had that effect on you.  I suppose I better explain…

When we were young there was a gooseberry bush next to the shed at the end of the garden.  I seem to remember it being removed after our sister was born.  When ever we asked that thousand dollar question… you know the one:

“Where did I come from?”

We were all told that we were found under a gooseberry bush!