Once again we take a wander through the talent at Art in the Garden. 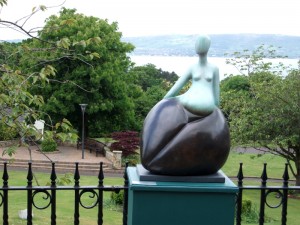 Ana Duncan works in bronze and ceramic from her studio in Churchtown, Dublin.

She has exhibited in numerous galleries and exhibitions in Ireland including Royal Hibernian Academy, Royal Ulster Academy, Claremorris Open, Boyle Arts Festival, Sculpture in Context at Fernhill Gardens, the National Botanic Gardens and Art in the Garden in Belfast.

She has taken her work to exhibitions in Belfast, Boston, Britanny, London, Paris, and Scotland. She has been involved in many two and three person exhibitions in the Solomon, Kilcock, Lavit and Greenlane Galleries.  Her two solo exhibitions were hosted by the Mill Cove Gallery in Castletownbere, Co Cork, in 2004 and 2010.

Her Commissions include a life size Mother and Child sculpture for Tallaght Hospital, Dublin. Her work is represented in the collections of the Bank of Ireland, Allied Irish Bank, IFSC collections, Department of Finance and Personnel, Northern Ireland, Morrison Hotel, Tannery Restaurant and several private collections in Ireland USA, UK, Sweden, Spain Portugal and Ireland.