The Mater Infirmorum Hospital, commonly known as The Mater is now an acute hospital in Belfast.  The Latin word Mater is commonly pronounced both “matt-er” and “mae-ter” by residents of the city and this has led to the phrase “You go to the maeter to find out whats the matter.”.

The Mater Infirmorum (Mother of the Sick) Hospital admitted its first patients in November 1883, in Bedeque House on the Crumlin Road. It was initially founded by the Sisters of Mercy but has always treated patients without regard to class or creed.  The main hospital opened in 1900. In 1909 the Mater Hospital was officially recognised as a university teaching hospital and is still associated with and receives students from the Queen’s University Medical School. 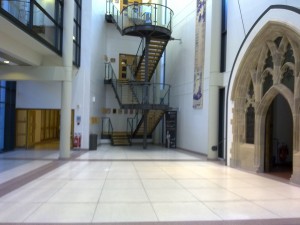 As the first phase of a modernisation programme, a new ward block and day procedures unit was built at the rear of the present block, at a cost of £15 million.  The old and new blend well together. 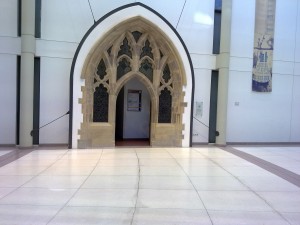 The doorway above leads to the old hospital where the outpatient clinics are held.  It is like entering a different world.  Victorian Corridors, dark wood, high windows and claustrophobic clinics.

On the way there and back I came across this Elevator that looks well used for over one hundred years.  I decided to use the stairs back down to ground level. 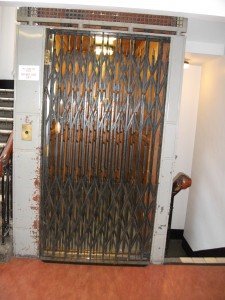