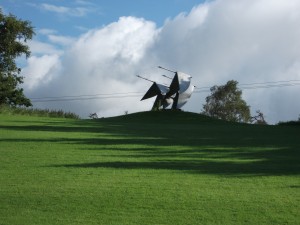 The death of Eamonn O’Doherty was announced on Thursday last.  He was born and grew up in Derry.   He graduated from University College Dublin with an Architectural Degree and was awarded a Visiting Scholarship to Harvard University. Before turning to sculpture full-time in 2002, he lectured for many years at the Faculty of Architecture at the Dublin Institute of Technology as well as the University of Jordan, the University of Nebraska and the Ecole Speciale d’Architecture in Paris. 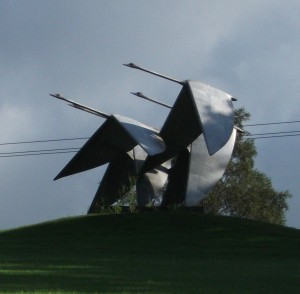 The overhead cables are not part of the work.

The sculpture is owned by Antrim Area Hospital and is located on an elevated site close to the main hospital entrance.  It stands 4.5m (16 ft) high and is visible from the front of the hospital, and from the main access roads – when the bushes are trimmed.

The sculpture is made in stainless steel and the surface reflects the changing light. The imagery of swans was chosen for several reasons; it reflects the colonies of swans at Lough Neagh; it has reference to migrating birds, their returning each year giving a sense of continuity; and it also has reference to the story of the Children of Lir, in Irish mythology when four children were turned into swans.

Eamonn O’Doherty is best known for his large-scale public sculptures, thirty of which stand in Ireland, the United Kingdom and the United States.

Among these are landmark works such as:

The James Connolly Memorial, Dublin
Tree of Gold, outside the Central Bank in Dame Street, Dublin
Anna Livia Fountain – aka Floozie In The Jacuzzi (1988), Dublin
The Quincentennial Sculpture in Eyre Square, Galway,
The Great Hunger Memorial in Westchester, New York, completed in 2001 and described by the New York Times as “this great work”.

He is also a painter, printmaker and photographer and has won major awards for paintings.  He is the co-author of books on the diverse subjects of environmental planning and traditional Irish music.
You can read more about him here