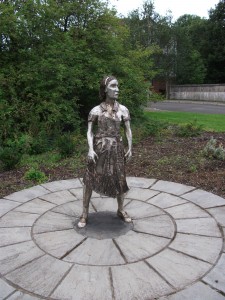 Northern Ireland of the fifties and sixties was a landscape dotted with “Mills” of that time, and with those of the past.  These Mills were the life blood of many a village. They were Flax and spinning mills, not forgetting the paper mills of Ballyclare and Larne.  They provided employment for everyone – from young children to the elderly. 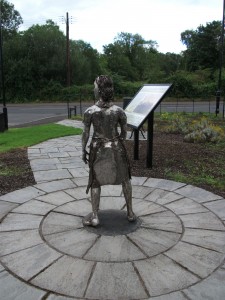 Rear view of the Millworker

Not to be confused with Kells, County Meath or Kells, County Kilkenny. the village of Kells that I have in mind today, is in County Antrim, Northern Ireland, near Ballymena.  An old stone bridge crosses the Kells Water, separating Kells from the adjacent village of Connor. 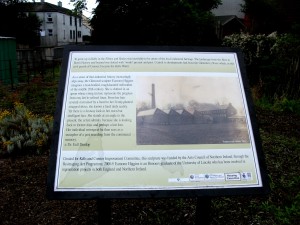 Children were legally permitted to work at the mills from about the age of ten years on a part-time basis. They usually spent alternate days at the mill, typically working as doffers (replacing full yarn bobbins on the spinning frames with empty ones), and in the classroom. When they first started work, many suffered what became known as ‘mill fever’ before they adjusted to the high temperatures, damp or dusty environments, noise and exhaustion.    They were working 14 – 16 hours a day, with short breaks for meals.  Some of the children were deformed by the work – the long hours would make them tired and clumsy and there would be accidents as they were caught up in the machinery.

The noise from the belts that came from the line shafting which drove the machinery from the water wheel was deafening and the air was filled with dry flax plant dust called ‘pouce’ and workers could not avoid inhaling it. As it settled in the lungs, it caused shortness of breath and many bronchial complaints. 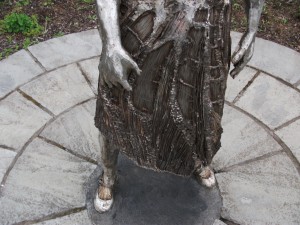 Eamonn Higgins is a Sculptor/Artist based in North Antrim. He specializes in and for the most part, works with hot forged steel, but he has been known to work with other materials i.e. ceramics and glass.

Eamonn is presently pursuing this philosophy through his residency in the South Lough Neagh wetlands by challenging our perception of elegance and beauty through uncompromising deformation of metal using fire.
Eamonn believes that beauty can be found in the balance between contrasts, as it makes us ask questions about the similarities that lie between. In a community, for example, this may be prevalent between the young and old where a mutual feeling of persecution can be a catalyst for an expression of cultural pride and communal togetherness.

This short video is based on cotton and woollen mills on Mainland UK, But I am sure there was little difference in the conditions of the Mills in Northern Ireland.  As an aside the video seems to be in a bright museum, the actual mills would have been larger, darker and more full of dust.

A very interesting link to a History of Irish Linen.