My comment is on its way by mail GM. Hope that you will find some way to use it!

This cartoon was attached to the email 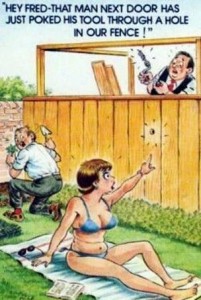 This cartoon reminded me of a tale from another time!

When my mother was a young bride she enjoyed nothing better than sunbathing in the privacy of her back garden.  The only way you could see into the garden was from the bedroom window of the house next door.

One day the lady next door called to mammy from over the hedge.   The neighbour was a little embarrassed about what she wanted to say…

“Would you not like to cover up a little and not be a temptation to the men”!

Mammy was not in an outfit like the lady in the cartoon, in fact mammy did not possess a bikini.  She was wearing a pair of shorts and a blouse.  The outfit in the photo below.  She had purchased it on holiday in Nice in 1939, just before the outbreak of WW11. 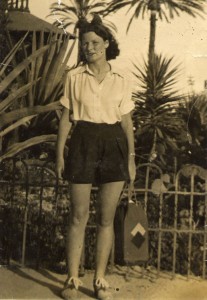 The shorts are still about, I wore them in the garden in my time.   Elly managed to model them at one point and now my sister wears them while painting and decorating.

The two ladies were neighbours for fifty five years and became good friends, but never thought to call each other by their first names.