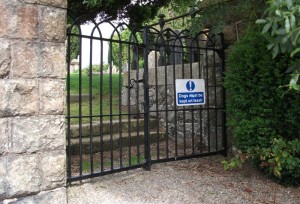 The graveyard is on high ground open to the worst of the bitter winds and driving rain so common in this part of the world. 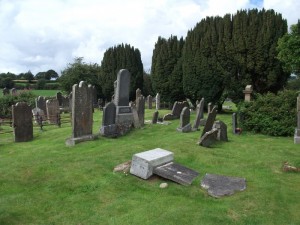 With the years, the ground has sunken in places, so it is necessary to watch each footfall.  At one point I almost fell into an excavated grave.  Stop laughing Son-in-Law… you won’t get rid of me that easily.  😆 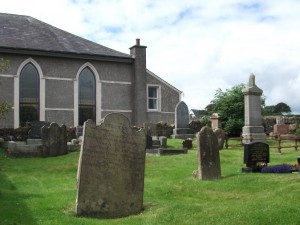 Ancient and modern, behind the wall is Kilbride Presbyterian Church, the headstone to the right of the foreground is modern, though I didn’t take note of the date.  I wonder how the smooth polished stone will look in a 100 years time? 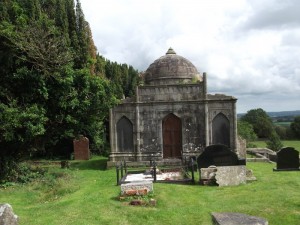 Pride of place in the graveyard belongs to the Stephenson mausoleum, which was built in 1837 and commemorates several of the family, including four medical men.  Among these is Samuel Martin Stephenson, who died in 1834, he was ‘Superintending Surgeon in the Madras Presidency’.  Perhaps that would explain the Indian influence of the tomb.

The doorway is well weathered and rusted, but if you look carefully it bears the name of a local man John Rowan*, who made it. 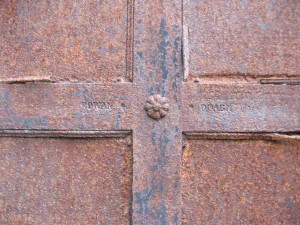 In the recesses round the mausoleum are memorial plates to the members of the family.  Battered by the elements over the 174 years, some were difficult to read. 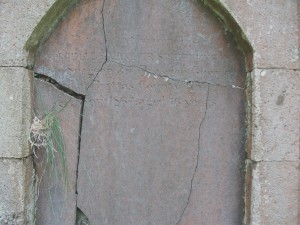 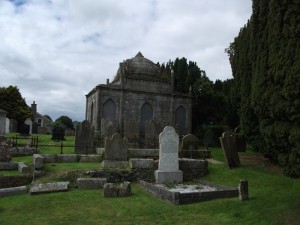 Directly behind the mausoleum are four graves in a railed off area, so I was unable to gain access to the other memorials on the mausoleum.   Of the four standing memorial tablets in a line against the wall, the one on the right marks the grave of schoolmaster William Galt, a United Irishman who established what is believed to be the first Sunday School in Ireland in the late 1700s.  He also started a renowned book club which attracted many members, after the Battle of Antrim soldiers destroyed many of the school books by playing football with them.  He died in 1812.

A white headstone in the fore ground marks the family grave of a much loved local writer, Florence Mary McDowell.  Born in Bridge House in Doagh in 1886, she taught at Cogry Mills Memorial School.  She met her husband at the ‘tumbling’ bridge just next to her home.

In her eighties she wrote two books, ‘Other Days Around Me’ and ‘Roses and rainbows’, which recreated the Doagh of her childhood.  She died in 1976 but her ability to bring bygone age to life continues to charm a new generation of readers.

* Rowan, an engineer and inventor, established a foundry in the village of Doagh.   Along with various iron implements, field gates and ornate entrances, Rowan designed and built a steam coach and on 1st January 1836 drove it through Belfast where he had set up his agricultural machinery and boilermaking business in York Street.  He is credited with inventing the ‘piston ring’ which greatly increased the efficiency of engines.   Rowan was born in Doagh in 1787 and died in Belfast in 1858. A memorial to John Rowan stands in the centre of the village.

** An early name for Ballycastle is said to have been Port Brittas.