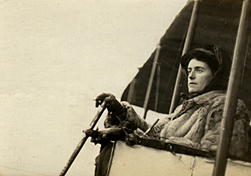 A new sculpture in Glengormley Park commemorates the remarkable achievements of Lilian Bland, the first woman in the world to design, build and fly her own aeroplane.

When I heard about the sculpture I was determined to dust off the camera and go see for myself.   One little detail was missing.  I was a little early…… 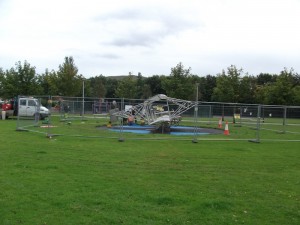 When did that ever stop me?  I had a chat with the workmen and they allowed me inside the rails provided I kept my feet on the grass.   The circle of ground beneath the sculpture was still a work in progress.  Hot progress and colourful too. 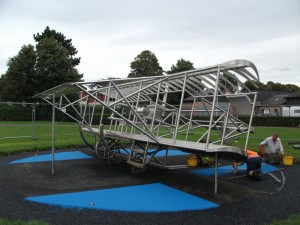 Closer look at the ‘MayFly’ Sculpture

Lilian, who was born in Kent in May 1878, came with her widowed artist father to live in his native Carnmoney in East Antrim at the home of her aunt, Sarah Smythe in 1900.  Carnmoney Hill became her favourite place to wander and dream about taking off into the clouds.

Inspired by the daring exploits of the first airmen such as Louis Bleriot, Lilian designed and built a ‘flying machine’ Mayfly in the workshop and stables of her home. In February 1910, with the assistance of her aunt’s gardener, Joe Blain, Lilian first flew her aeroplane ‘The Mayfly’ as a glider on the slopes of Carnmoney Hill.  Her flying field was also home to a bull and as Lilian later wrote, “If it gets annoyed and charges I shall have every inducement to fly!” 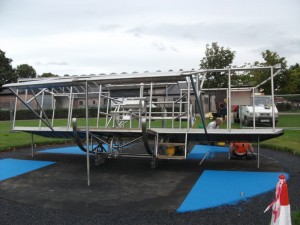 The young Lilian Bland had been inspired by the Frenchman Bleriot flying the Channel in 1909 and so designed and built the Mayfly.

She was so keen to fly that she came over to England to pick up the engine and took it a back on the train with her.   Once home in Ireland, there was no petrol tank so she used an empty whisky bottle and her aunt’s ear trumpet.

When she flew it, it actually flew for 30 yards. It was barely longer than a cricket pitch but only a little short of the distance Orville Wright flew on his first flight in 1903. 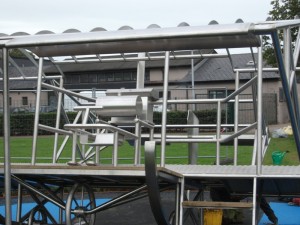 Requiring a larger field for powered flight she arranged for it to be towed to Lord O’Neill’s 800 acre park at Randalstown.   Her first flights from this location were made in August 1910 and reach the dizzy height of upwards of 30 feet. 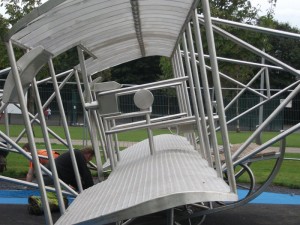 She continued to fly and improve her design until the spring of 1911, when her father who didn’t approve of her flying activities, persuaded her to give it up if he bought her a car. She did so, and became Ford’s first agent in the North of Ireland.

Her family disapproved of what they saw as ‘unladylike’ jobs.  For the granddaughter of the Rev Robert Winstringham Bland, perpetual curate at St George’s Parish Church in Belfast, our Lilian was far from conventional despite her genteel background. She smoked, wore trousers, was a ju-jitsu expert and a good shot with a rifle and was even known to swear a little.

In 1911 she married her cousin Charles Loftus Bland and lived for years in Vancouver Island, Canada. They had a teenage daughter who died in an accident, Lilian came back to England and settled in the village of Sennen near Land’s End.   She died there at the grand age of 92.

The official unveiling and renaming of the Park will take place in the next week or so.  Maybe then I will discover the name of the Sculptor or Designer.