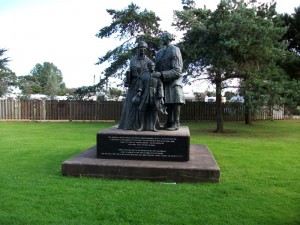 This imposing sculpture at Larne’s Curran Park features a family group on their way to an emigrant ship, about to set out on the journey across the Atlantic.  It might have been Friends Goodwill which was the first vessel to set sail from Larne to the Americas in 1717. 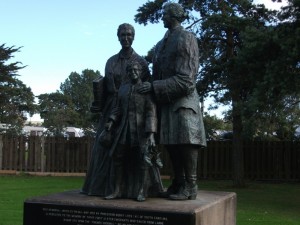 The figure of the father has his arms around his wife and son in a protective gesture, while the mother carries the family Bible to symbolise not only the importance of their faith to these 18th century emigrants but also that often the family tree and other documents were contained within the leaves of this precious book. The boy, carrying his shoes so as not to wear out the leather, also has a small bag containing his belongings. An added little feature for our feathered friends is that one of the shoes has been created as a bird bath! 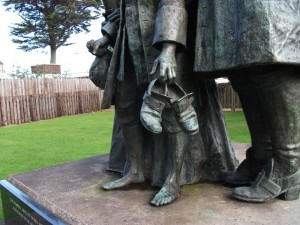 The monument, cast in bronze, was designed on the advice of the Ulster-American Committee by sculptor Ed Barton and was unveiled in May 1992 by an American Professor, Dr. Bobby Moss of Blacksburg, South Carolina, an acknowledged expert on the role of the Ulster Scots in the American Revolution. The memorial tablet carries the statement from the Tyrone poet and cleric W. F. Marshall, that no other race in the United States can provide a roll so long and so shining with honour than can the Ulster Scots.

There is another sculpture at the far end of the park, that will keep for another day.