Yesterday, I promised to return to an archway deep in the Cathedral Quarter of Belfast. 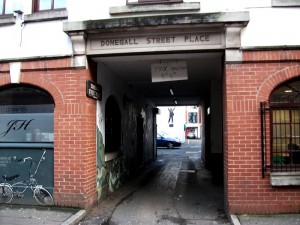 Looking through that arch I thought of my father, singing about ‘sittin on the wall upon a Sunday, watching the girls go by.  I was not so much looking at the lads sitting on a wall, but a man hanging by a thread on a wall! 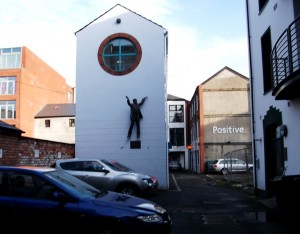 You believe me now, right? 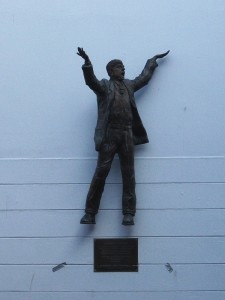 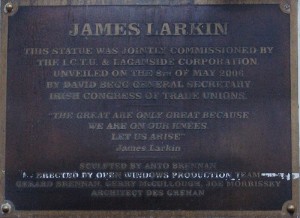 The plaque beneath the sculpture reads:

This statue was jointly commissioned by the I.C.T.U. & Laganside Corpration and unveiled on the 8th of May 2006 by David Begg General Secretary, Irish Congress of Trade Unions

It includes the quote from James Larkin:

“The Great are only Great because we are on our knees.
Let us Arise”

This work is a celebration of Irish Trade Union Leader and socialist activist James Larkin who moved to Belfast in 1907 and founded the Irish Transport and General Workers’ Union, the Irish Labour Party and later the Workers’ Union of Ireland.

Recently, fellow blogger – Speccy and I met for coffee.  We talked for Ireland and sure why not, The first and last time we met ‘in the flesh’ as they say, was last March at the Irish Blog Awards in Belfast. When we reached the dregs of our coffee cups and time to leave the table, she asked about my plans for the day.  With time to kill she came on the sculpture hunt with me.  I had a list as long as my arm, but would be happy with three or four items to photograph, explore and write about.

As we emerged from the alleyway we took a left and very soon we were looking in a shop window at the very same statue!!  Two gentlemen inside, beckoned us in.

We entered the premises of Open Window Gallery and Workshop. 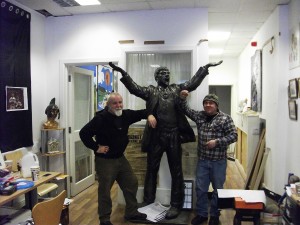 Gerard (L) and Anto (R) Brennan in their studio with another James Larkin.

We could have stayed there all day.  The lads were delighted to see us.  The studio contains not alone their own work, but paintings of fellow artists.  We were welcome to wander, photograph, chat and ask questions and they were a mine of information about other works of art and where to find them. 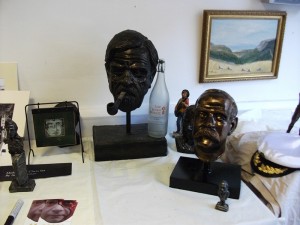 I forgot to ask them how much it would cost to have my bust bronzed!

Anton Brennan (unfortunately does not have a website) began sculpting in the early 1990s making figures from clay. He is best known for his chess sets featuring caricatured models of politicians.

Gerard was putting the finishing touches to a rather special chess set as we chatted. 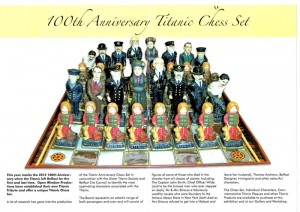 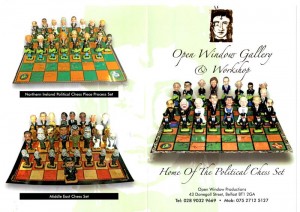 Just click on any of the photos for greater detail.

Before I met Speccy, I had wandered close to Writer’s Square and discovered the Occupy Belfast site.  I saw a sculpture and had difficulty photographing it,  I did my best 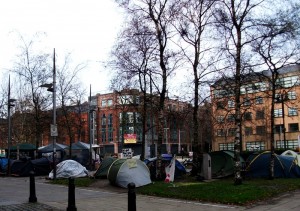 The camp site was small and smoke shrouded.  I lingered long enough to take a photo of the sculpture. 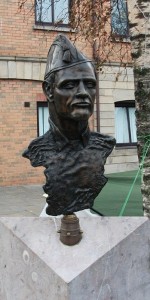 No Pasaran – They shall not pass. 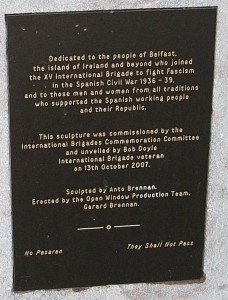 The plaque informed me that the sculpture was by none other than Anto Brennan and erected by Gerard.