Most of my photos don’t do justice to this mosaic sculpture that I feature today.  It is owned by Translink, and housed in Europa Bus Station, Glengall Street ,Belfast. 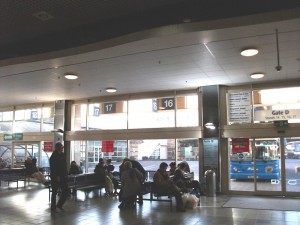 If I were to get a bus to Dublin, this is where I would head to, for the second bus of that journey.  I have travelled from here, met friends and relations as they arrived and waved them off at the end of their stay.  Just to the right of where I stood to take this view is the focus of my piece today. 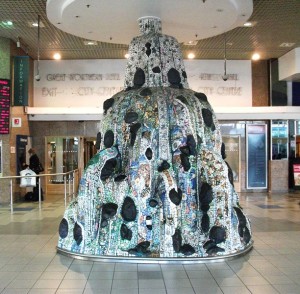 This bus centre opened in 1989, and the sculpture was commissioned and completed in 1991. It was funded by Translink and the Arts Council of Belfast and recognised by an award from the Association for the Business Sponsorship of the Arts(ABSA now Arts and Business). 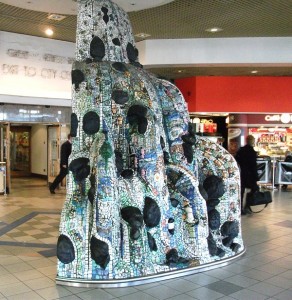 The sculpture is 5 metres high and depicts a waterfall, an avalanche of Irish memorabilia with a strong northern accent that represent the places linked by the Ulsterbus service (from this terminus).

The artist wanted to encapsulate a community feel so he requested donations of ceramic souvenirs from Ulster, some of which were than selected for inclusion in the finished piece.

The public response was considerable. These kitch items were then, along with specially fired ceramics, reassembled by the artist to achieve the overall design of the work. An Ulster Fry beside the Giant’s Causeway, presents from Bangor, Bushmills and Ballymena, Guinness (a favourite drink across the land), Whisky, shamrocks, public buildings, cathedrals, churches, beauty spots, wildlife etc are all portrayed. Some pieces were made from scratch. 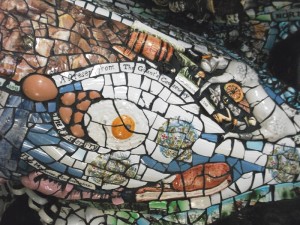 John Kindness is well-known for his humorous and quirky visual commentaries and use of unconventional materials,  John Kindness is one of Northern Ireland’s best known artists, particularly in relation to the work he has produced for public spaces including The Big Fish at Donegall Quay in Belfast (1999) ( featured last week) and this piece at the Ulsterbus Station in Glengall Street. 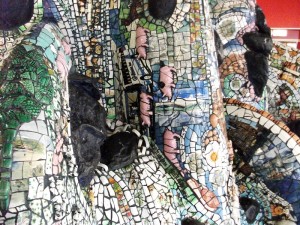 His work has been is included in many private and public collections including the Boston Museum of Fine Arts, Irish Museum of Modern Art, Victoria and Albert Museum, London and the AIB Bank. 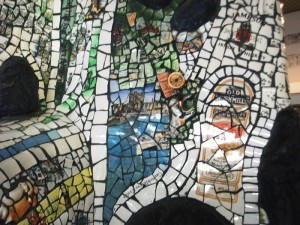 John is an artist of international reputation. Previous commissions include ‘Romulus and Seamus’ Arts Council Northern Ireland Sculpture Park and ‘The Museum of the Old Lady who Swallowed a Fly’ in The Royal Hospital for Sick Children, Belfast.  The latter I hope to explore at a future date.

The curved back which is mainly black tiles has photos and credits of John Kindness, Steve Raibl, Michelle Deignan & Peggy McKenna.  They all played a part in producing this work of Art.