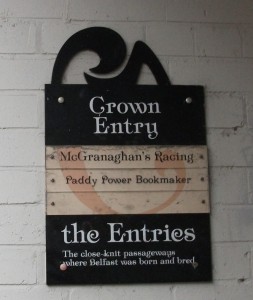 Crown Entry connects Ann Street to High Street. I suddenly realise I have few photos for this one but the story holds even without them. 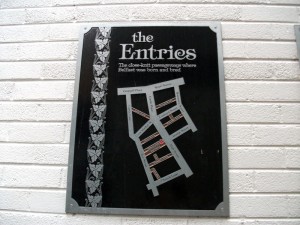 Each of the entries now has a sign like the one above, with a red marker to show where you are. As you can tell this poster belongs one entry over, at Wilson’s Court.  Crown Entry does not have such a sign. 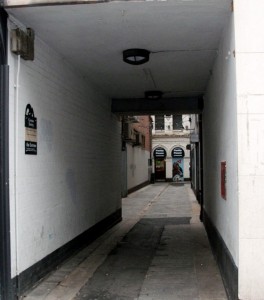 Robert Read started the family letterpress printing business at number 12 Crown Entry around 1840. His brother Patrick was at that time a writing clerk.

In 1843, another brother Daniel, joined in the partnership and as the firm grew so also did the premises and it soon extended into number 10.

They became Letterpress Printers and Lithographers, by 1850 they had become publishers and in 1855, they founded The Belfast Morning News a tri-weekly newspaper.

The newspaper has continued to evolve and modernise with an online version today.

I wonder what Robert would think of the journey his dream has taken?

While researching for this post I found a link to The Criobh Ruadh Club, which was in Crown Entry, popular for more than Irish dancing classes and billiards!