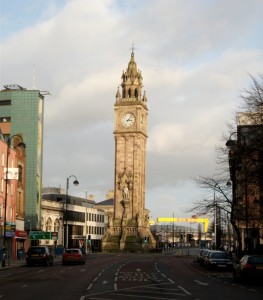 The Albert Memorial Clock Tower in Queen’s Square at the foot of High Street, is often referred to as Belfast’s, Leaning Tower of Pisa because the monument, completed in 1869 is slightly out of plumb.

In 1865 a competition was held for the design of a memorial to Prince Albert, Queen Victoria’s late husband and Prince Consort.  The winner was  W. J. Barre, who had earlier designed Belfast’s Ulster Hall. Alas, following some shenanigans  W. J. was not awarded his prize and the contract was secretly given to Lanyon, Lynn, and Lanyon, who had come second.  The decision maker for the prize was one of Lanyon’s partners who just happened to be a Belfast Member of Parliament! We think these antics are a modern phenomenon!  The construction cost £2,500 and was raised by public subscription, so following Occupy Belfast Mark 1 a public outcry, the contract was eventually awarded to the rightful winner Mr Barre.

Designed in “German Gothic” style, the 30-metre tower features a base of flying buttresses topped off with crowned lions clutching shields, above them a gigantic, full-length statue of Prince Albert in his garter robes. He is looking up the High Street. A two tonne bell is housed in the tower and the clock was made by Francis Moore of High Street, Belfast. 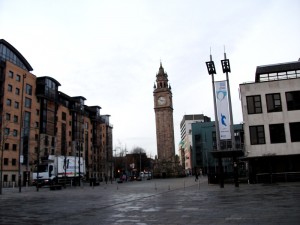 Back View of the clock from Meeting House Square

It was built on wooden piles on marshy, reclaimed land around the River Farset, which ran along High Street.  Over time these foundations moved and the top of the tower was leaning four feet off the perpendicular. Due to that movement, some ornamental work on the belfry was removed in 1924 along with a stone canopy over the statue of the Prince.

To prevent the tower leaning further and to repair damage caused by the elements and heavy passing traffic, a multi-million pound restoration project was completed in 2002. During the project the wooden foundations were strengthened, the majority of the decaying carvings were replaced and the entire tower was cleaned.

It has been beautifully restored, and the sandstone tower made pristine by having 3 inches shaved off each side, thereby removing the unsightly shrapnel markings inflicted by German bombs in WWII and IRA bombs in the “Troubles” of the 1970s.

It has been the traditional gathering point in Belfast for over a century on New Year’s Eve.