Today I finish this mini series of The Belfast Entries.

Black George McCartney ran  a sugar refining business in the second half of the 1600s, on the corner of Waring Street and Sugar House Entry which runs parallel to Bridge Street from north side of High Street. 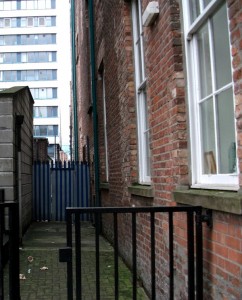 He ran the Waring Street sugarhouse up to his death in 1683. In 1678 he had leased adjacent land called Wilkins tenement in order to extend the sugarhouse. His sons Arthur & Chichester McCartney inherited the premises. 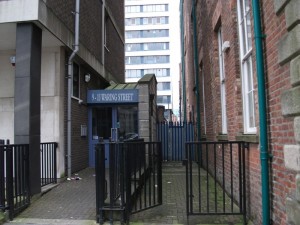 The entry later became better known for the “Dr Benjamin Franklin Tavern”, owned by the Barclay family. The tavern was used as a meeting place for the United Irishmen, who met there under the name of The Muddlers’ Club”.

Next to Sugarhouse Entry is the Commercial Building, nowadays known as The Northern Whig. It was opened in 1820 and replaced four thatched cottages, one of which was a woollen drapers shop owned by the famous United Irishman Samuel Neilson.

The entry was closed (using emergency legislation) as a precaution against bombs and is now nothing more than a service access and is no longer a public thoroughfare. Best view is from Waring Street to High Street. 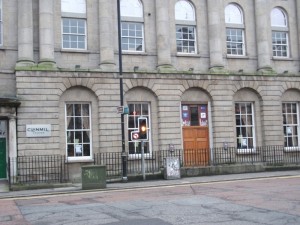 Nearby at the junction of Waring Street, Donegall Street, North Street and Bridge Street, is the oldest part of the city. Dubbed the Four Corners, it was from here that all milestones from Belfast were measured.

On the junction of the four streets stands the old exchange and assembly rooms. Now a two-storey 18th Century edifice. The building began life in 1769 as a single storey marketplace, with the second level added five years later. In 1792, ten Irish harpists congregated for the historic Belfast Harp Festival. Their music was notated by Edward Bunting and a revival of traditional Irish music began. The building is more familiar to today’s locals as the former Northern Bank. Occasional art exhibitions and plays are held within its somewhat faded grandeur. 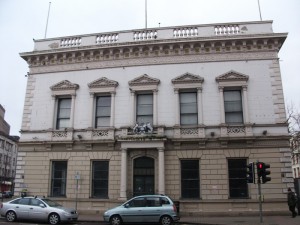 Wilson’s Court is just off Ann Street. One of earliest surviving buildings is The Mermaid Inn, which used to be The Rainbow Hotel in the 1860s. It’s family run and like The Lifeboat Bar and The Capstan, took its name from the city’s seafaring history. When I walked past the black roller shutter was down, so not worth a photograph.

Castle Arcade, although an historic route and site of the original Belfast castle, it now lacks character due to the modern buildings on either side. It cuts diagonally from Cornmarket/High Street to Castle Lane. Several large historical photographs of the Entry are permanently displayed on the walls.