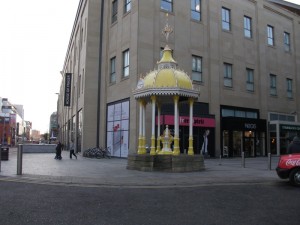 There is a round plaque at the front of the fountain canopy in remembrance of Daniel Joseph Jaffe.

It was first sited in Victoria Square before being moved to the Botanic Gardens, south Belfast in 1933 and lay there for almost 70 years in poor condition. The fountain had to be painstakingly restored due to its condition and to study its original colours underneath the years of neglect. 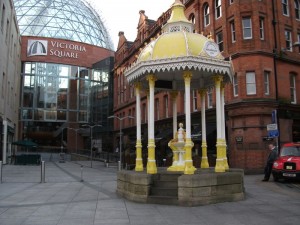 It has been returned to the original location outside the new Victoria Square Mall.

It is a great link to Belfast’s history and the role of the Jaffe family. Daniel Joseph Jaffe was born in Mecklenburg, Schwerin, northern Germany on August 19, 1809. He laid the foundation stone of the synagogue in Great Victoria Street. He died in Nice on January 21, 1874, and was buried in the Jewish plot at Belfast Cemetery. 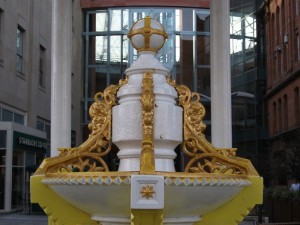 Daniel Joseph Jaffe and his older sons formed Jaffe Brothers, linen manufacturers, bleachers and merchants, at Bedford Street, Belfast. Otto a younger son, took over from his older brothers when they retired in 1877 and managed the business they had started with their father.  In 1880 the business had moved to 9 Donegall Square East and 10 Donegall Square South. 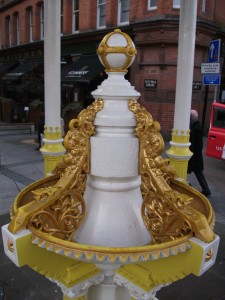 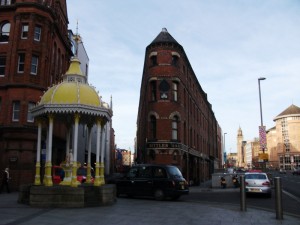 The narrow triangular building is Bittles Bar. If you need a winter warmer you could try:- 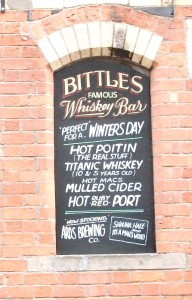