On that infamous day last September, I took my camera for a walk.  I began at Antrim Forum leisure centre, in search of some sculpture. The piece I was looking for no longer existed, but I found this fine fellow:- 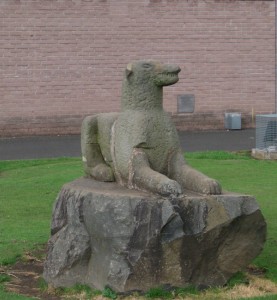 In the early 1600s Antrim Castle was home for Sir Hugh Clotworthy and his young bride, Lady Marion Clotworthy. It was surrounded by a beautiful woodland estate on the shores of Lough Neagh. It may well have seemed an idyllic home for Sir Hugh Clotworthy, but he was often absent on military business. I am sure that Lady Marion found life at Antrim Castle a lonely and miserable existence. She whiled away long hours wandering through the woodlands of the castle grounds. The only twittering back then was for the birds and I am sure they were not restricted to 140 characters! 😉

Legend has it that on one of her solitary strolls a terrifying howl broke the silence of her walk.  Out from the trees stalked a huge wolf hackles raised, preparing itself to attack the terrified young girl.  The wolf’s howl was answered by a ferocious roar and an Irish Wolfhound bounded out of the forest.  Lady Marian screamed and collapsed in a faint. 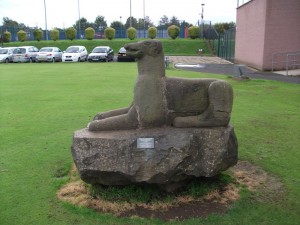 It is believed that the two beasts fought each other to the death. Upon awakening, her gaze fell upon an incredible sight. The wolf lay dead, but standing guard by her side was the badly injured Irish Wolfhound. 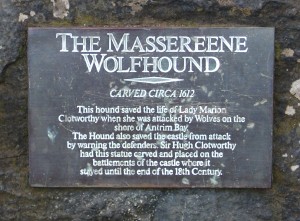 Like all good shaggy dog stories, this tale has a couple of variations.  Some say that Lady Marian then brought the dog to the nearby stream and tended to its wounds, but as soon as it had recovered it disappeared as quickly as it appeared. Others would have you believe, that together they made their way back to the castle and the four legged guardian escorted Lady Marion on her daily rambles.

One stormy night the howling of a wolfhound was heard high above the wind. The wardens of the castle quickly lit their beacon fires only to see a large army of Irish invaders coming towards the castle. Well by now you know the Irish… always ready for a good fight, and in the midst of fierce firing, an agonised howl was heard. The castle was saved, but daylight revealed a trail of blood that led to the wolfhound’s corpse.

Once again the wolfhound had saved the Clotworthy family from disaster and Sir Hugh Clotworthy had a stone statue made in honour of the wolfhound. By encasing the hound in stone and mounting it upon one of the castle’s front towers, Sir Hugh shrewdly calculated the potential to ward off the hostile  superstitious natives.

Eventually, alterations to the castle caused the statue be removed from the castle tower and placed on a wall about 10 foot high at the gate of the estate. There it remained until the late 1970s, when, invaded by ivy and in danger of falling, Antrim Borough Council, with persuasion from the Irish Wolfhound Club of Northern Ireland, had it removed to a location in front of the town leisure centre. In deference to the old Massereene family legend, it still remained within the bounds of the original Antrim Castle estate (the actual castle was destroyed by fire in 1922).

The statue stood about 3 foot tall from plinth to head. It was in need of repair having had some very crude work done on it some years ago.

On Tuesday 21st September 2011, the Wolfhound returned home to Antrim Castle Gardens as part of the first stage of refurbishment. 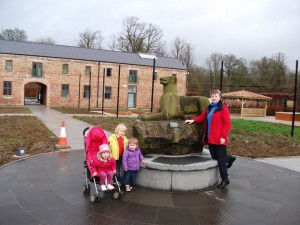 A Place of honour.

Magda, a young lady from Poland, was out for her regular walk with her daughter and the two young charges she child minds each day. She offered to take my photo beside the wolfhound at the new location. Having the children in the photo added some great colour on a dull day. Magda was telling me she attends English classes in the evenings. 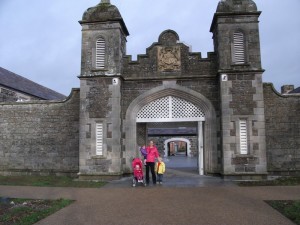 Magda and her charges.