This bit is fun!  May it long continue.

I arrived at Elly’s house on Thursday, to be greeted by my wonderful son-in-law George and a very excited Buffy. Buffy thinks my role in life is to play with her, so within five minutes I had all her toys at my feet.

A car pulling up outside interrupted play and took Buffy’s attention in another direction. George’s father and sister were here to whisk George away for a pre arranged engagement. We did have time for a coffee and a catch up on family news before they left.

The car had hardly rounded the corner when Sue arrived closely followed by Elly, the wine was poured and the conversation started as they added the finishing touches to their contributions for a pot luck supper. I was only allowed to watch and chat.

Soon the other girls arrived and the table filled with exciting dishes for me to try.  The meal began, the wine flowed and the conversation continued. It was an excellent night. Alas I was so relaxed I forgot to take any photos. 🙁

Friday.  Elly left early for work, but George was off so we had quality time together and Buffy giving me plenty of attention and exercise.

Birthday Dinner was soon upon us, a day early, as George would be working on Saturday. @eolai joined our gathering for food and fun round the table. Back in September I wrote about his time with me during the painting tour. I was asked in the comments if there would be a painting for me, to which I replied:

There will be a painting for me, but with time constraints and so much to see, I suggested saving my piece until I am sixty five! That gives him six months. The subject of the painting…. I left it up to him, to pick his favourite of what we saw together over the last few days.

So on Friday I was presented with my painting. 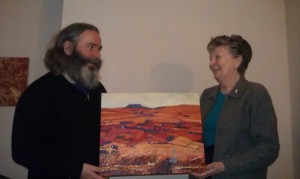 A view of Slemish by Liam Daly – @eolai

I am honoured to have played a small part in #the painting tour and now each time I look at this painting the memories of those few days will return warm and fresh to relive and enjoy. You can see another view of it here with a little more information.

B-Day began with texts arriving just after midnight and went on right through the day. I had Skype calls, phone calls, emails, IMs and cards for most of the morning.

Bangalore was first on that list, where a very young lady invited me to visit and wanted to know when I was coming over. I told her Grannymar needed to learn to fly like a bird first, so it might take a long time.

Moving from India to Australia brought good news from Melbourne and a fun conversation from Sydney. Elly made a special breakfast and Ireland woke up and focus returned closer to home. plans were made for later in the day and Elly and I headed out for a little retail therapy.

We met with friends who hijacked me allowing Elly some time by herself for a few hours. We had dallied over coffee, moved on to Murphy’s for special Birthday Sorbet, and then settled in with wine. We had catch up, news and laughter.  All good.  Back with Elly we finished the evening with some quiet quality time.