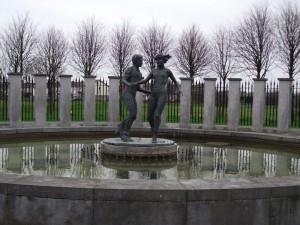 It is hard to believe that thirty one years have passed since the fire that destroyed Dublin’s Stardust nightclub in Artane, near Coolock, in the early hours of St. Valentine’s Day 1981.

The fire resulted in the death of 48 young people and injured and disfigured a hundred more. Even to this day, survivors and bereaved continue to suffer. 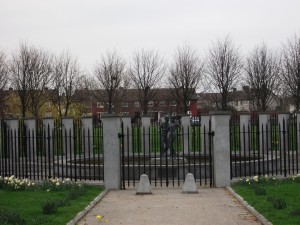 The fire had a tremendous impact on Dublin people and most of those killed came from the immediate vicinity.

On the tenth anniversary of this disaster, Dublin Corporation were asked to design and develop a memorial park to commemorate the tragedy. The main aim was to provide a park with a memorial, the design of which would be relevant to the tragic event. 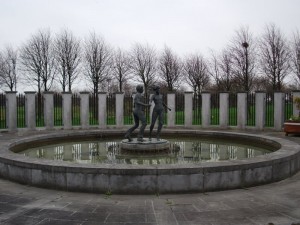 The Stardust memorial park was opened on the 18th September 1993 on a lovely sunny day witnessed by hundreds of local people. 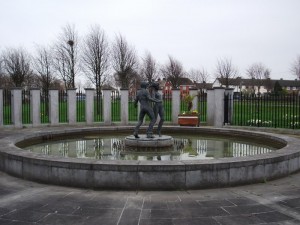 The memorial is a circular pool, 8 metres in diameter, the principal feature of which is a bronze sculpture of a boy and a girl dancing, designed by sculptor Robin Buick. Water is pumped by 48 jets in the illuminated fountain which surrounds the sculpture. Alas. the day I was there the fountain was off, but if you click on the link to Robin’s website, you will be able to see it in all its glory.

The pool is faced with limestone, which is also used as paving material around the pool. This area is enclosed by an incomplete circle, symbolising the short life of the 48 victims. The incomplete circle of 270 degrees forms an enclosure 20 metres in diameter around the entrance and its boundary is comprised of limestone piers with 48 railing panels symbolising the number of young people who lost their lives. 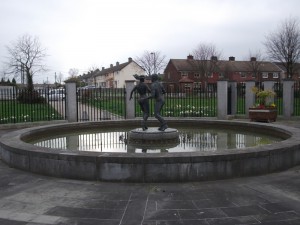 An avenue of lime trees is positioned 30 metres from the centre of the memorial. The park also contains a junior football pitch, an all-weather floodlit pitch, a playground, walks and plenty of tree planting all enclosed with mild steel railings on a pliant wall.

Coolock is a Barony which accounts for most of north Dublin city, from the coast in and stretching out to Swords. The civil parish takes in the land between the Tonlegee Road (as far as Donaghmede) and the Malahide Road, as well as the lands on either side of the Malahide Road between Darndale and Artane, and the lands either side of the Oscar Traynor Road on the approach to Santry.

Coolock has a history dating back over 3,500 years – a bronze-age burial site in the area dates back to 1500 BC. The settlement grew up around a small early-Christian church. The majority of the modern Coolock, was built-up as part of a programme of phased inner city slum clearance (between, roughly, 1952 and 1987).