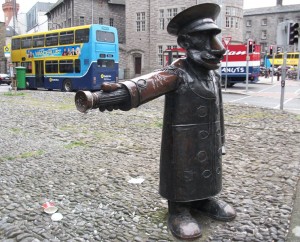 This sculpture of a cinema usher, entitled Mr. Screen, is a caricature and stands outside the Screen Cinema at the junction of Hawkins Street and Townsend Street in Dublin.

The duties of a cinema usher include checking tickets, directing people to their assigned seats, distributing programmes, answering questions and assisting people in finding restrooms and refreshments. It might also include a security role. 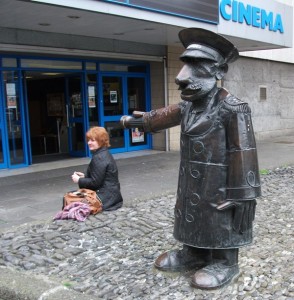 Vincent Browne studied at the National College of Art & Design and the Jan Van Eyck Academy in Holland. He represented Ireland in the 7th International Small Sculpture Show in Budpest. He won the Oireachtas Gold Medal for sculpture three times (1974, 85, 86); the Waterford Glass Prize (1992); and several grants and awards from the Arts Council and the Department of Foreign Affairs. His Maritime Piece in Wicklow town won the Concrete Society of Ireland Sculpture Award in 1993.

Nowadays we hear constantly about people suffering from stress. It was not a word in our lexicon when I was young. If any of us were feeling uptight, frustrated or angry about something, mammy set us to do some physical task. By the time the chore was completed, all angst and frustration were worked off and a cheerful calm was restored.

A few years down the line when were working for our living, when form was not good, we went to the pictures/movies to see a ‘weepie’ or a comedy and either cried or laughed our way through. We danced our way home with all the troubled emotions settled….. sure it was better and cheaper than a visit to the doctor or a bottle of pills.

Going to the pictures has been very much on my mind in recent months.

In the middle of last December I became aware of a project at the hands of Planet Korda Productions.

See You at the Pictures! is a new documentary from Planet Korda Pictures in association with RTÉ. We are looking for stories/anecdotes about all aspects of the cinema-going experience from people of all ages.

It was a quiet week so I decided to jot down a few memories…. before I knew it, I was clicking the ‘send’ button. The following day I had an email thanking me for my contribution. You can read it here.

Last week interviews were being held in Dublin and I was asked if I would be available for a chat. I went along on Wednesday afternoon and shared some memories of my visits to the pictures, cinemas that are no more and how some of the pictures had an impact on my life. I hope it was helpful.

Of course, I might be lying in a bundle on a cold cutting room floor by now. No worries, it was a very interesting experience.