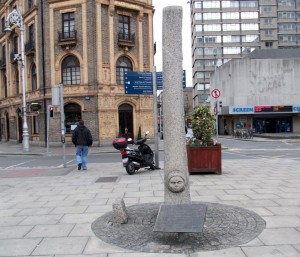 It was near this point that the famous Steine or Long Stone (a standing stone, 12-14 feet high), was thought to have been erected by the Viking inhabitants of Dublin in the 10th or 11th centuries. The river Liffey was originally much broader than it is now, and this present stone marks the original shoreline at this point.

Townsend Street as we know it today, was once a strand that seems to have functioned as a landing place for boats arriving in Dublin, throughout the Middle Ages. The original Long Stone, now long gone, was probably set up to mark this landing place. It became one of the main landmarks around medieval Dublin. 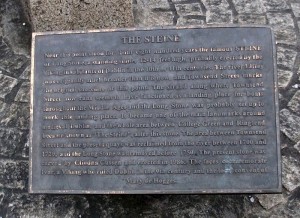 Land between College Green and Ringsend became known as “The Steine”, after this stone. The area between Townsend Street and the quays was reclaimed and developed between 1700 and 1720 and the old ‘Long Stone’ was removed before 1750. 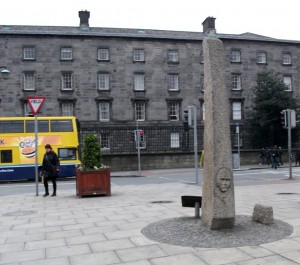 The Steyne/Steine with Trinity College in the background.

The stone sculpture we see today was carved by Cliodna Cussen, it was erected in 1986.
The faces on the modern stone commemorate Ivor, a Viking who ruled Dublin in the 9th century and the local convent of Mary de Hogges.