It was hard to credit that my journey from Co Antrim to Co Down was taking place in the month of June and not darkest November. Setting out at 3pm, I drove through the darkness of fog, road spray & rain so heavy it was necessary to use dipped beams and fog lights! My sympathy was with those running, walking or dancing through the streets carrying and trying to keep a ‘torch’ alight.

My rendezvous was with the speccy family at the Outlet Centre outside Banbridge and we were to travel together from there into the town.  Mr Speccy was Torch Bearer No. 90 and we were headed to find a Pole/Lamp Post with that number on it. 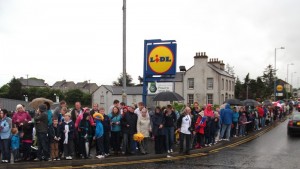 Pole No 90 and basecamp for The Speccy Family

In our group we had a proud Mum & Dad (who travelled from England for the occasion) Mrs ‘Pole 90’ aka speccy, Girl1 & Girl2. Along the way we grew in numbers with friends, colleagues and school children.

The miserable wet day may have soaked the clothing of the spectators, but it certainly didn’t dampen the spirits of the crowds waiting all along the streets of Banbridge in Co Down, yesterday evening. 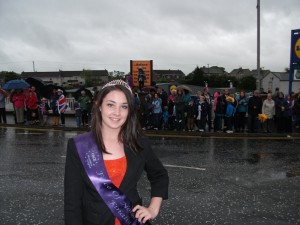 A smile in the rain from a finalist for Face of Northern Ireland as we wait for the torch bearers to arrive. 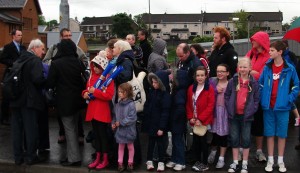 The pole with a gold number 90 was the spot where Mr speccy would accept the flame from the previous runner and begin his journey. We got there in good time and spread along the kerbside. As the minutes passed the crowd swelled and buzz of chatter grew with n air of anticipation and excitement. 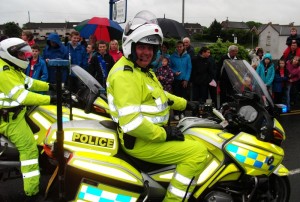 Police outriders were the clue that the parade was arriving.

There I go again… distracted by a Toyboy on a bike and look what happens….. 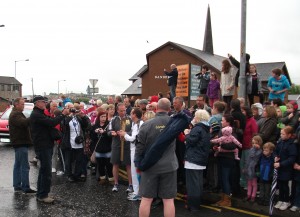 I almost missed the man of the moment arriving to be greeted by family and friends! 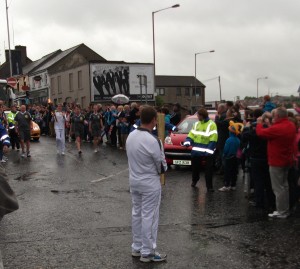 In place and ready for the hand over of the Olympic flame. 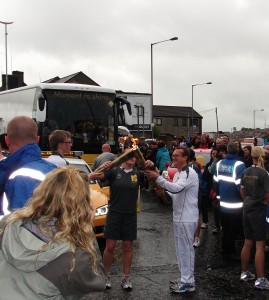 Passing on the flame. 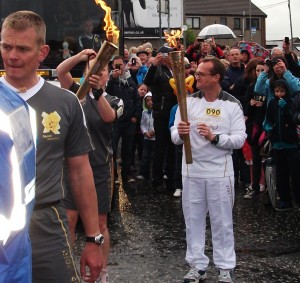 Robbie aka Mr Speccy – Son, husband, father, teacher & friend – a man known to go more than the extra mile for those in need, is ready to run for Northern Ireland in the Banbridge stretch of the London 2012 torch route. 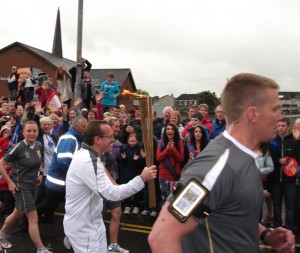