The story goes that after years of ministering to the bodies and souls of the wretched lepers on the island of Molokai, Father Damien (Canonised in 2009) used the memorable phrase in a sermon, “ We lepers”.  His listeners knew that their pastor and friend, who ministered to them so selflessly, was now indeed one of them.

Leprosy also called Hansen’s disease, is a disease that has been known since biblical times. It causes skin sores, nerve damage, and muscle weakness that gets worse over time. Effective medications exist these days, isolating people with this disease in “leper colonies” is no longer needed.

Other terminal diseases of years gone by, are now considered Chronic or curable.  The life sentences given to my parents in the late 1950s, are nowadays considered treatable by surgical procedures or medication.  Even some of the cancers are now considered ‘chronic’ with patients returning to an almost normal life while being aware of their bodies and any changes in them.

For every disease that becomes curable a new horror creeps out from the undergrowth and the cycle begins again on the road to learning symptoms, reaching a diagnosis, and then finding a way forward to treatment or a cure.

There are about 6,000 rare diseases, those with an incidence of 5 per 10,000 or less. One in 17 people will be diagnosed with a rare condition at some point in their lives.

Even within my circle of blogging friends, I know several who are or have been touched or ministered to loved ones with Motor neurone disease (MND), Huntington’s (HD) and Progressive Supranuclear Palsy (PSP).

Imagine for a minute, that you are aware that something is not as it should be, so you go to the doctor. This leads to being poked and prodded before attending for endless tests, X-rays and scans. Then finally the day dawns when you sit outside the door to The Big Doctor – Northern Ireland speak for the Consultant – and tremble the time away, before you are called into the room…..

The Big Doctor might smile gently – if s/he has good people skills – or be abrupt through lack of them, and Say “Well all the results are in A N D I am sorry to say you have veryrareindeedgobbledygookitis!”

I stole that phrase from speccy. That is what it sounds like when you are sitting in that chair…. Looking blankly at the ‘The Big Doctor’.

Waiting for him to explain a little bit more in simple terms whether it is worth while your going home at all or swinging by the graveyard to save the family the expense of the hearse etc.

After what seems like an age the dryness in your mouth eases and your tongue moves enough to ask a couple of questions.  He tells you to have a chat with your GP. The GP, when asked the questions that have increased to half a dozen by the time you get to see him/her, tells you to look it up on the internet!!!!!

I am not joking. That is what happened to speccy and her mother and if you click on her name you can read all about it. It was the kernel that helped her to band with others and form:

They are in the early stages, taking baby steps in finding the best way forward.

It was one of the reasons that I was found wandering the streets of Banbridge in glorious weather for ducks……. dressed like this: 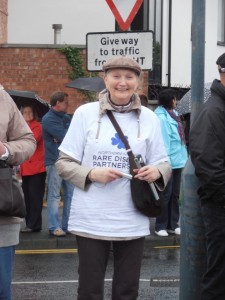 Baby steps are a long way from miracle cures, but they have to start somewhere and you know what they say about Rome……

Magpie, a recently retired member of our group chose the topic for today – If you can cure one leper, why not cure them all? Now it is time to wander on over to check on which road our other active members have taken with the subject:- Anu Delirious, Maxi Maria/Gaelikaa, Maria SilverFox OCD writer, Padmum, Paul, Ramana, The Old Fossil, Will Knott.