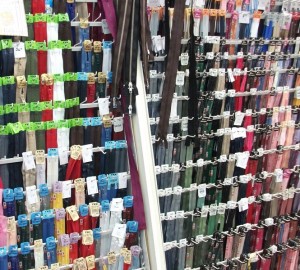 Selection of zips for sale

It is a fastening device consisting of parallel rows of metal, plastic, or nylon teeth on adjacent edges of an opening that are interlocked by a sliding tab. (Sounds very technical and more complicated than it is!)

On the long road to today, the zipper has passed through the hands of several dedicated inventors, none convinced the general public to accept the zipper as part of everyday costume. The magazine and fashion industry made the novel zipper the popular item it is today, but it happened nearly eighty years after the zipper’s first appearance.

Elias Howe, who invented the sewing machine received a patent in 1851 for an ‘Automatic, Continuous Clothing Closure.’ Perhaps it was the success of the sewing machine, which caused Elias not to pursue marketing his clothing closure. As a result, Howe missed his chance to become the recognized ‘Father of the Zip.’

The design used today, based on interlocking teeth, was invented by Swedish born scientist Gideon Sundback in 1913 and patented as the “Hookless Fastener” and after more improvements patented in 1917 as the “Separable Fastener”.  One of its first customers was the US Army. It applied zippers to the clothing and gear of the troops of World War I;

From the slow beginnings, the zipper has found its way into everything from plastic pencil cases to sophisticated space suits and countless “fly” jokes. The zippers used today are little different to that of the Gideon Sundback design of 1917.

When you see YKK, you think of zippers, because they have manufactured zippers since 1934. The name YKK was first registered as a trademark in 1946. Over the years, the letters “YKK” were stamped onto the zippers’ pull tabs, and thus YKK became known as the Company’s trademark.

The inspiration for this post was the wonderful speccy and her tale of woe.  Perhaps a Zip Her would be the answer.

I wonder if I could……