This whimsical statue of James Augustine Aloysius Joyce (1882-1941) stands where North Earl Street meets O’Connell Street. As usual Dubliners have their one name for the piece, this time it is known locally as The Prick with the Stick.  James Joyce was once a manager of the nearby Volta Cinema. 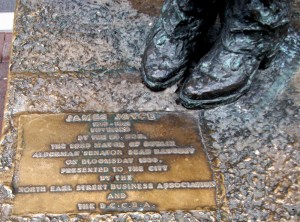 Yesterday was Bloomsday in Dublin. The name comes from ‘Useless’ as we called it when I was a child. I am of course referring to Ulysses which is set on 16 June 1904. 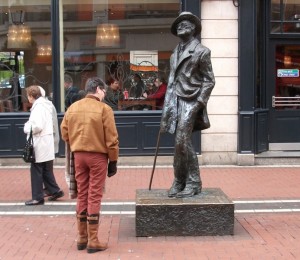 BBC Radio 4 devoted the whole day to Bloomsday and the reading of the work. I got totally caught up in it and forgot about blogging for the duration.

Marjorie Fitzgibbon had an early dream to become an actress and so it was that in 1947 at the age of seventeen, she left behind a life that began in a two room log cabin in Reno, Nevada and boarded a train, heading for the bright lights of Hollywood. She did not have an easy road in life. Along the way, she survived a life-long struggle with manic depression, alcoholism, three turbulent marriages and the death of her eldest daughter.

While on honeymoon in Greece with third husband writer Constantine FitzGibbon, she fell in love with the art of sculpture. “When I saw those marvellous statues in that white Greek light, she said to herself: “I’ve got to try this.” The rest is history.