I remember the day. We were lying on the carpet under the bay window in the ‘Sitting room’. Nowadays you would call it a lounge. I liked the feel of the carpet on my legs and arms. It was late morning and the light was switched on.

I have the evidence. 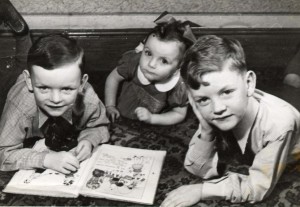 In the middle of things as usual, with my brothers.

We were a family of three at the time. ‘1949’ was all that was written on the back of the photo. There are other photos taken that day, but there is no sign of brother No.3 anywhere in any of them, so it must have been before he was born in the month of February 1949. We three had birthdays all within two weeks, brother No 2 on the left was at the end of February and brother No 1 and I two days apart of each other in March. That would have me approaching my second birthday and the boys their fourth and sixth.

Although I do not remember the name of the photographer, I can still in my mind’s eye see his face and the camera on what I now know was a tripod. He played games with us like a magician. I remember oranges he did tricks with.

The boys are dressed as I always remember them until their teenage years – shirts that had starched collars, ties, grey short tailored trousers and knee socks with turn down tops and finished off with well polished shoes. The only variation in my wardrobe in 1949 was the daily change of colour for my smocked dress and matching ribbon in my hair. Did you notice my hair?  There was a little bunch on the top of my head and practically none at the sides. Thankfully mammy’s constant cutting when it appeared, helped to thicken it up.

While searching through my photographs I found this one from 1950. 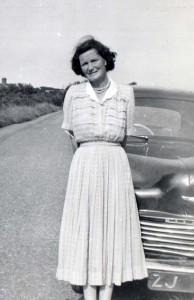 The car was a black Hillman Minx saloon and the reg was Z J 1717. I remember that summer dress with short sleeves. The fabric was a very soft muslin in a pale green pattern. I loved the feel of it and the style. If it was still about I would love to wear it. The collar was detachable for laundering and starching – we were a well starched family back then! 😆

If mammy was wearing a summer dress without a cardigan it must have been August. It had to be. She gave birth to sibling No 4 in July.

The topic My first memory was chosen for us this week by Conrad. Time now to join me as I make my way through memory lane accompanied by: Anu, Delirious, Maxi, Maria/Gaelikaa, Maria SilverFox, OCD writer, Padmum, Paul, Ramana, Shackman speaks, The Old Fossil, Will Knott..