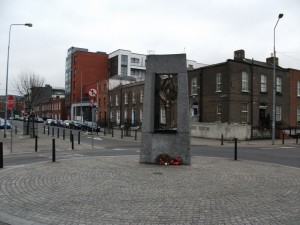 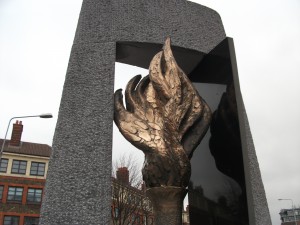 Standing on the junction of Buckingham Street and Sean MacDermott Street in Dublin’s North Inner City, is Home by Leo Higgins, is a monument to the memory of all those who died as a direct or indirect result of heroin in the area. 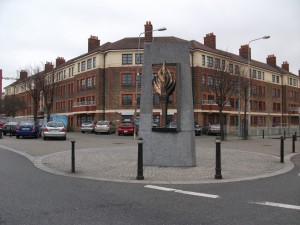 Since 1996, a Christmas Tree had been erected each year on the site, where the memorial now stands. Stars were placed on the Christmas Tree to commemorate those who had died from drugs. In that first year, eighty four stars hung on the tree’s branches. By December 2000, the tree held one hundred and twenty four stars, each one placed there for someone known to have died locally from heroin. Some families lost as many as three or more of their children to drugs. The idea of the Memorial project was not to replace the Christmas Tree, but to create some form of more permanent marker at the site. 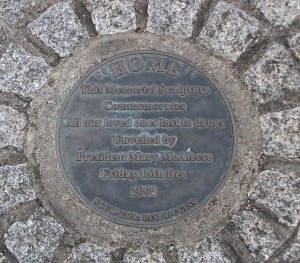 Leo Higgins was born in Dublin in 1951. He went to London aged twenty-one and worked for ten years in a foundry. He now says that casting and making things in metal is, “What I absolutely want to do”. He considers himself “extremely lucky as I have the foundry and I also get to make sculpture”. However, he points out that “it’s bloody hard work”.

He was winner of the Oireachtas Prize for sculpture in 1984 and 1985. It is a national award open to all Irish artists living at home and abroad. Higgins has exhibited in solo and group exhibitions throughout Ireland. He is a founder member of the Sculptors Society of Ireland.  In 1986 Leo started a ten year, one-day-a-week teaching stint in The National College of Art & Design, Dublin. 1987, saw the beginning of Cast Foundry in the heart of Dublin’s “Liberties” with Leo Higgins and Belmullet-born Colm Brennan at the helm.