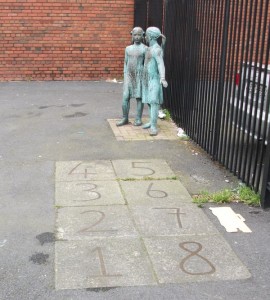 This bronze sculpture was commissioned by Dublin Corporation. It is set on the pavement beside ‘hop-scotch’ squares, indicating they are waiting to play. When I was young the name we had for hopscotch was ‘Beds’.

Beds consisted of chalk lines that formed boxes and were numbered from 1 to 8. The shape I favoured is below.

Sometimes we added a semicircle above squares 7 & 8. It was free space – we could stand on two feet and move about within that space. To play the game we needed something to throw and kick. Old shoe polish tins filled with clay were just the right size and weight and we had a plentiful supply in our household!

Draw a hopscotch design on the ground. Chalk is the best drawing medium on asphalt, patio stones or concrete. It washes away easily with rain. The squares should be large enough to fit one foot and to make sure that a stone/tin thrown into the square will not bounce out too easily. Beds or hopscotch is a hopping game and wonderful for teaching balance. 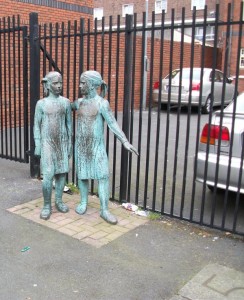 Throw the polish tin or similar object to land on square one.
It has to land inside the square without touching the border or bouncing out.
If you don’t get it right, you lose your turn and pass the tin to the next person.
If you do get it in the square, you are ready to move on.

Hop through the squares, kicking the tin to the next square as you go, being careful to keep it within the lines. Each square gets one foot. Which foot you start with is up to you, but you must use the same foot throughout.
You can’t have more than one foot on the ground at a time, unless there are two number squares right next to each other (4-5, 7-8), in which case you can put down both feet simultaneously (one in each square). Always keep your feet inside the appropriate square(s); if you step on a line, hop on the wrong square, or lose your balance and step out of the square, you lose your turn.

Pick up the marker when you reach square eight and hop into the semicircle if you are using it.
If there is no semicircle, then when you get to the last number, turn around (remaining on one foot) and hop your way back in reverse order to the beginning.
Then hand the tin to the next player. 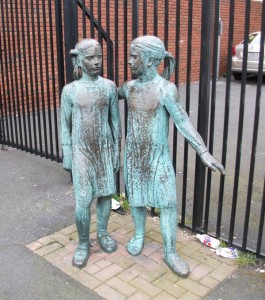 Fred Conlon was born in Killeenduff, Easkey, Co Sligo. He attended the local National School and the Vocational School in Easkey. He was awarded a five year scholarship to the National College of Art and Design. Self taught in the Arts to this stage, Fred commenced his formal studies in the Art to the age of 17 at the National College of Art in 1960. Initially he studied Painting, Sculpture, Drawing and a range of crafts but he increasingly came under the influence of Domhnail O’Murchadha, assistant Professor of Sculpture who encouraged him to specialise and to do a Sculpture Diploma.

He has won many Public Commissions through open competition and his work enhances public places as diverse as the wood sculptors in Hazelwood, Sligo to the street sculpture in bronze at Portland row, Dublin, to the road-side sculpture in limestone at Bunratty in Co Clare, as well as the commemorative sculpture in bronze in the Parnell National Park in Co Wicklow.

“The philosophy which underlines my work is based on change, continuity and the search for measures in natural order. The value of a sculpture relies on its own existence through time, independent of its creator and should usually speak
for itself. It should beckon you to walk into its space, to travel its surface and edge, to sense, to touch, to peer into and ponder. As you leave it should invite you to return another time so that it can communicate further.
Sculpture is a celebration of lime and time. The stone I carve is millions of years of age. It is old and stubborn and reluctant to change but change it must for that is the challenge to the sculptor. The marriage of man and stone through spirit, thought and toil wrestles the forms into a unity of sculpture.To appreciate sculpture is to look, to touch, to sense, to learn and communicate.”