‘A baker’s dozen of mixed buns’ may well describe the members of the LBC, with a wide range of  life’s experiences under our various belts.  Many are in care giving roles of one type or another, but the common factor with all, is a great sense of humour – one of the greatest assets a person can have. Humour helps us to defuse difficult situations and reduce our stress levels and cope with whatever life throws our way.

‘Care giving’ is a term that arrived in my lexicon in very recent years. Mind you, it is something that has been part of my life from as far back as I can remember.  It may well have begun with helping my younger brothers to put their socks on or tie their shoes, carrying bundles of freshly ironed clothes up stairs to help an overworked and tired mammy, or finding the reading glasses that an elderly relation had mislaid for the fourth time in one hour.

Winter coats were a normal and well used part of daily apparel in Ireland, we often needed to wear them right round the year when summer skipped past without stopping. We helped our elders to don them and close the buttons, so became familiar with slow ageing limbs and stiffening joints. Walking sticks or canes were handed to frail elderly and we quickly remembered which hand to put the cane in. We learned the correct way to guide them into a chair or up and out of it.  We lifted heavy legs into or out of bed and opened and held doors for safe passage through. 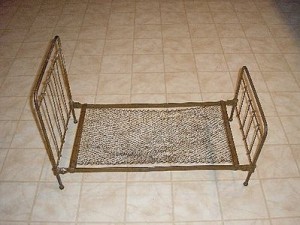 Picture the bed above with wooden head and foot boards. We had one when I was young, and it plus a mattress moved up and down the stairs like a yo-yo.  My brothers and I became past masters at assembling/disassembling, humping and carrying that bed up and down the stairs when needed. With a large extended family we always seemed to have somebody inside in the bed! A room with a fireplace became the dedicated ‘sick room’ for the duration. It had sliding doors to the main living area, so when company was part of the cure, the doors were opened and the patient became part of the family buzz. If the patient grew tired or needed rest the doors were closed once more and our noise level reduced.

Felled every winter by severe bronchitis, that bed became my home for three weeks or a month, with daily visits from our local doctor.  Back then rest and an even temperature were considered the road to recovery. Medication was always something I reacted badly too, so the Doctor struggled at times to find an effective cure. The fire burned 24/7 since it was long before we had central heating. Meals and tempting treats were carried to me and my pillows were checked and puffed up by my brothers. They handed me items that were out of reach, told me stories of their day and made me laugh.

I was eight years old when my sister was born, giving me the opportunity to feed, change and bath a living doll. A year later mammy had a serious heart attack when my father and older brothers were out. I had to quickly deal with mammy and sort out my three younger siblings. My father’s long road through illness began when I was eleven and he did not make for an easy patient.

Never once was any of the above considered as ‘care giving’. It was doing what was needed to the best of our ability and as quickly, quietly and smoothly as possible.

All good training for the future that lay ahead of me.

I was blessed with the gift of my own living doll and enjoyed every moment of caring, playing, teaching and indeed learning from her. It was only when she reached 18, that I pushed her out of the nest (for university) and changed the locks! 😉 Thankfully Elly has become a well balanced hard working capable and caring daughter, wife, and friend to all she meets.  She sees. She cares. She gives!

As many of you know the curse of cancer entered my home twenty years ago when I became a sole 24/7 care giver for my husband Jack, over the next six years. In that time Elly was at school and later University.

The training I had as a child certainly helped me along this road and to a whole new level of caring. Since we had no relations for a hundred miles, I switched off from the outside world for the duration, resigning from all organisations that I had served on, in order to devote all my energies day and night to the task in hand. It was long before I had a computer or heard of the internet.

My neighbour and friend was also diagnosed with cancer, after wrongly been treated for gall bladder over a period of nine months.  There were many times and days following chemo, when I sorted Jack out and made him comfortable before crossing the road to my friend’s house, to bed bath and cream her feet & legs. This gave her great comfort.

Compared to the road other friends are walking, my tasks were easy.

OK, so my having three consecutive hours sleep, instead of an hour at a time, was a rare occasion to celebrate.  We had the odd day when Jack would tell someone that ‘We washed the car/cleaned the windows/cut the grass’(you pick), when in fact he had been sitting inside the window watching me complete the task. He never complained, had total faith is any suggestion I offered and always knew who I was!

Right to the end he was the best thing that ever happened to me!

Master care giver, Ramana chose this week’s topic for the Loose Blogger’s Consortium. I suggest you bring along your thermometer and cooling wipes to check how the other active members give care to the subject: Anu, Delirious, Maxi, Maria/Gaelikaa, Maria SilverFox, OCD writer, Padmum, Paul, Ramana, Shackman speaks, The Old Fossil, Will Knott..