The ground was very wet and mucky to walk on. The sun was high but partly hidden by the trees.

Although she was on my own, the woods were never quiet, a cacophony of noise assaulted her ears. The waterfall was in full flow and almost obliterated the sound of the birds.

He came charging round a bend straight into her path, not pausing until he was directly in front of her. One swift agile jump…. he was aiming for her face.

Automatically she held out her hand as if to protect her own space. It had the desired effect, almost as fast as he appeared, he was rolling over on the ground.

Bending slowly she touched his tummy with featherlike strokes He didn’t object. He seemed to calm down and want more so she obliged. He was soft and warm to touch and only the damp ground prevented her from dropping to her knees beside him.

He didn’t want it to end. She had to admit she was enjoying his reaction.   He was soft and warm to touch and she didn’t want it to end either.
Then there were more running footsteps coming towards her, the owner sounded rather breathless.
“I hope he didn’t jump up on you.” He said. “This place is full of muddy characters.” 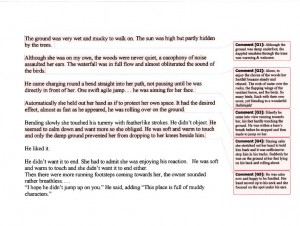 Although the ground was damp underfoot, the dappled sunshine through the trees was warming & welcome.

Alone, to enjoy the chorus of the woods her footfall became steady and relaxed. The rush of water over the rocks, the flapping wings of the resident heron, and the birds. So many birds. Each with their own score, yet blending to a wonderful Hallelujah!

Silently he came into view running towards her, his feet hardly touching the ground. He was within a hare’s breath before he stopped and then made to jump on her. Staying calm she stretched out her hand to hold him back and it was sufficient to stop him in his tracks. Suddenly he was on the ground at her feet lying on his back and rolling about.

Bending slowly she touched his tummy with featherlike strokes. He didn’t object. He was calm now and happy to be fondled. Her hand moved up to his neck and she focused on the spot under his ears.

She became aware of more gentle running footsteps coming towards her, the owner sounded breathless…..

“I hope he didn’t jump up on you.” he said with a smile, adding “This place is fully of muddy characters.”

My new found friend was a golden Yorkie and he suddenly had no interest in continuing his walk.  I chatted to his owner and eventually they turned for the car park and I went in search of further adventure.

About 100 yards on, I realised that once again I had company. This time I was being followed. The golden Yorkie had returned for another tickle and would have been happy to stay there all day.  Eventually I packed him off back to his owner and went on my way.

How come I don’t have that effect on Toyboys? 🙁 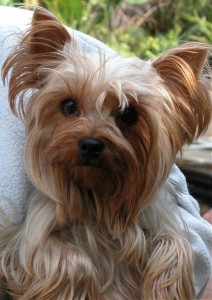 The topic Editing, was chosen by me to tax & tease my fellow LBCers, so why not hit the links and see how they are faring: Anu, Delirious, Maxi, Maria/Gaelikaa, Maria SilverFox, OCD writer, Padmum, Paul, Ramana, Shackman speaks, The Old Fossil, Will Knott.