On May 14, 2008, I wrote a rather long post about The radio. This particular radio had a place of honour in our house when I was growing up. It came from an era before television. In fact it was a wedding present that my parents were given in 1941. 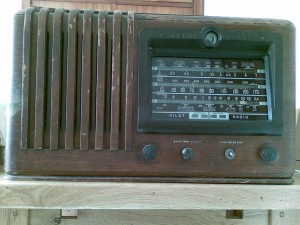 I went on to recall the part the radio played in our young lives and mentioned programmes from those far off days. The post was positively received with many comments about my memories and other programmes were recalled as well. The conversation went on for four days and then slowed up but every few months the radio came to life once more with further comments.

Yesterday morning a comment came through with no URL, when I checked the IP address, I got an Error 404 so deleted it. Last night I received an email from a gentleman called called Joe Keane, he was actually replying to the comment I had deleted in the morning. It came to me with a copy of the deleted comment attached.

I have decided to copy the message from John, the writer of the deleted comment, and the reply from Joe Keane. You might like to refresh your minds about the programmes that they refer to in the original post and if you click on the link (high-lighted) above it will take you to the post.  For those unfamiliar with blogs, to get back to this post just click on the Grannymar at the top of the page.

I am doing a piece on radio. Spot The Talent (1960’s) had three adjudicators. The men were: Eamon O’Gallchóir and Michael McNamara. Does anyone know the name of the female adjudicator?

In The Foley family the main parts were played by George Greene &amp; Peg Monaghan. I think Deirdre O’Meara played the part of the daughter Eileen but does any listener know who played the part of Brendan, the son? We hardly ever missed any of the episodes. We also enjoyed the mini series detailing the exploits of a detective called Michael O’Sullivan.

To Author John,
Yes like you I have fond memories of ‘The Foley Family’. I came from the country and this typical working class family seemed so far away from their rural cousins. I am almost certain that Brendan’s role was filled by the late Brendan Caldwell.
I can’t help you with Spot the Talent query. However as a child I loved Michael Sullivan detective. It had all the ingredients essential for good radio drama. I remember the ‘goose pimples’ that those episodes evoked in me as a child. Wonder where the main actor went from there?
keep up the nostalgic contributions.
Joe.

If you have any information about the programme ‘Spot the Talent’, please add it in the comments. It is not one that easily comes to my mind.