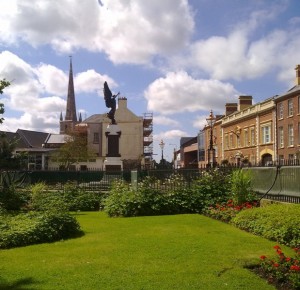 The total number of military and civilian casualties in World War I was over 37 million. About two-thirds of the military deaths were in battle, but disease, including the Spanish flu, still caused about one third of total military deaths for all combatants….. AND still we have not learned! 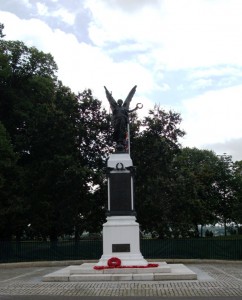 All over Northern Ireland you will find War memorials

This memorial was unveiled in 1923 to commemorate the people from Lisburn who died in the First World War. Names of people who died in World War 2 were added later.  The bronze statue of ‘Victory’ is by Henry C. Fehr. 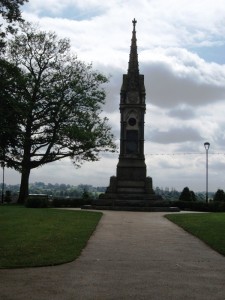 In 1870 Sir Richard Wallace became the landlord of Lisburn. After his death in 1890, Lady Wallace’s heir, Sir John Murray Scott, gave Castle Gardens to the people of Lisburn on behalf of Sir Wallace. 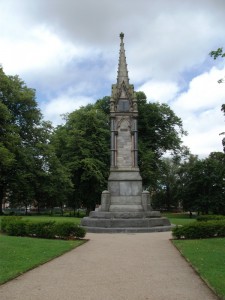 Front of the memorial 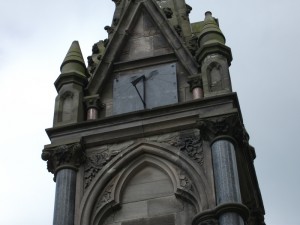 Some detail of the monument including a working sundial.

On a side note for readers and visitors to the National Gallery of Ireland, in Dublin – the Daniel Maclise’s picture The Marriage of Strongbow & Aoife on the end wall in the great hall, was one of two paintings donated by Sir Richard Wallace.

Lisburn was founded in the early 17th Century and its name in Irish is Lios na gCearbhach or Lisnagarvey, which means the ‘fort of gamesters’. The earliest reference to the word Lisburn is found in a baptismal entry of 11 January 1662. It has been suggested that Lisnagarvey was changed to Lisburn because the town was burned in the rebellion of 1641. Today, many local sports clubs still carry the City’s original name.