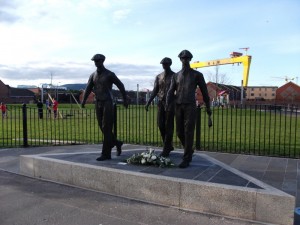 This new sculpture depicts three bronze shipyard workers walking home from Harland and Wolff where they built the Titanic. It was unveiled at Pitt Park on the Newtownards Road in east Belfast. 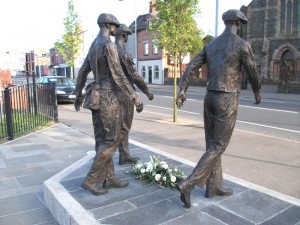 It pays tribute to the shipbuilding heritage of Belfast with one of the iconic Samson and Goliath cranes in the background. It is set within the time frame of 1912. 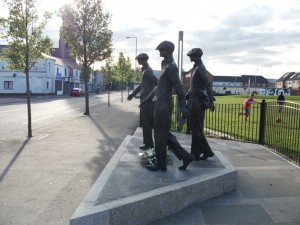 Ross Wilson, also responsible for the nearby C.S. Lewis sculpture at Hollywood Arches, graduated with a first-class honours degree in Fine Art from the University of Ulster and received his masters from the prestigious Chelsea School of Art, London.  He has had many solo exhibitions and has been included in group exhibitions worldwide.  He lives and works in Northern Ireland.  His aim is to encourage others to begin their journey of sight, to open up, to see into, to search beyond with the soul of the eye. 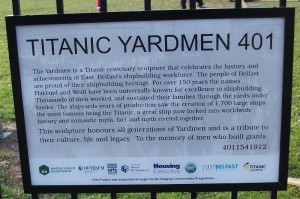 The title of the book seemed to fit this well hidden treasure. 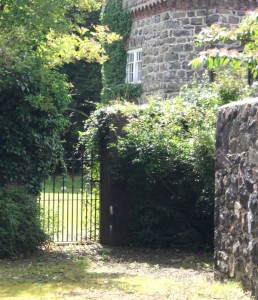 Can you see the ball waiting for someone to begin a game.

Mine is restored! The scars almost invisible now….. 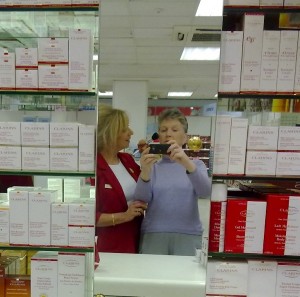 Thanks to the very patient and cheerful Maureen at the Clairns beauty counter in Boots Ballymena.

Earlier I was given the chop by my Toyboy hairdresser Stuart. 😉  I was delighted to see he had returned from his travels. Although not long, I have a very dense crop of hair and if not cut well, I end up with headaches and what my mother called ‘scaldy eyes’.  In the thirty five years since I married and moved to Northern Ireland, I have had only two hairdressers. I would hate having to make a change again.

Yesterday I drove down to my optician’s, to leave in my prescription sunglasses (damaged in the recent fall) for repair, and to test my leg for the drive today. While there I had my eyes checked again. My eyes are healthy, although there is a change in the prescription and the problems I have with the right eye are due to the nerve damage from last year’s fall. I still need to have patience with that! 🙁

Stuart, my hairdresser said that if I ever have a problem with driving over to the salon, he will come and cut my hair at home. 😀 I met some wonderful people today when I was out and a couple of abrupt and rude ones too. Never mind, the good people put a smile on my face once more and I intend to keep it there.

I am home, K k k knackered exhausted and sitting with my feet up. It was worth it to see the outside world once more.

The smile is back on my face! 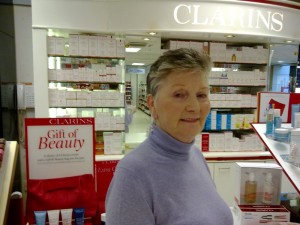 Little did Padmini realise when choosing Faces as the topic for our Loose Blogging Consortium this week, that mine would cause me so much bother. Now, why not join me as I trip walk gently on over to see what the other active members have to say on our subject:

In a tiny village on the Irish coast lived an old lady, a virgin, and very proud of it.

Sensing that her final days were rapidly approaching, and desiring to make sure everything was in proper order when she dies, she went to the town’s undertaker (who also happened to be the local postal clerk) to make proper “final” arrangements. As a last wish, she informed the Undertaker that she wanted the following inscription engraved on her tombstone:

“Born A Virgin, Lived As A Virgin, Died A Virgin”

Not long after, the old maid died peacefully.

A few days after the funeral, as the undertaker/postal clerk went to prepare the tombstone that the lady had requested, it became quite apparent that the tombstone she had selected was much too small for the wording that she had chosen.

He thought long and hard about how he could fulfil the old maid’s final request considering the very limited space available on the small piece of stone.

For days, he agonized over the dilemma, but finally his experience as a postal worker allowed him to come up with what he thought was the appropriate solution to the problem.

The virgin’s tombstone was finally completed,

duly engraved, and it read as follows:

Thank you Brighid for the story today.

Thankfully while recovering from a fall and spending more time than usual sitting with my legs raised, I had a knitting project on the go to distract me. 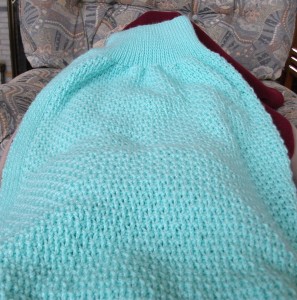 It was growing quickly and added another warm layer to cover my raised feet. That stitch looks nice…. but it is the wrong way round.  You are looking at the back of the work…. 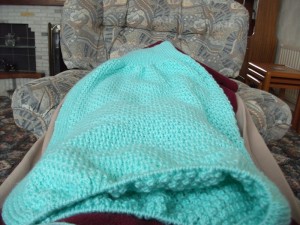 Working on a circular needle (as a straight needle) made it so much easier, you can see the front of the stitch peeping through, Recognise it yet??

Somewhere on my travels, it might well have been in one of the many Avoca coffee shops that I saw a lady walk down the floor wearing a Capelet and loved it immediately. I hope she didn’t think me rude, but I couldn’t take my eyes off that top. I was trying to soak in the details of how it was constructed. It looked fairly straight forward so I decided to give it a try.

Single rib and raspberry stitch were my choice in a gentle tone of green. Raspberry stitch is often called trinity or blackberry stitch and very common as a filler in traditional Aran knitting. 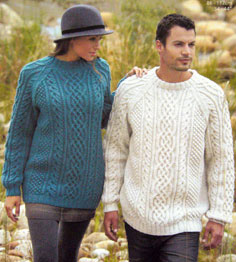 I began with a deep single rib waistband and then increased the stitches to give me the fullness and add a ten stitch rib at both sides. Please don’t ask… I cannot remember the exact number of stitches I used. Raspberry stitch is worked in multiples of four plus two stitches,over four rows.

When the back was long enough, I knit across towards the centre and cast off the middle five patterns and then continued in pattern on to the end of the row. 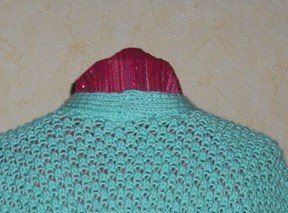 Back of the neck

Starting at the centre point at the back of the work and using a crochet hook, I chained ten stitches, then changed to knitting needles and worked in single rib until I met the stitches already on the needle at one side and worked in pattern to the end of the row.This was now one side of the front.

Back at the centre I worked into the same ten chain stitches and continued the rib to meet the stitches on the other side of the work. 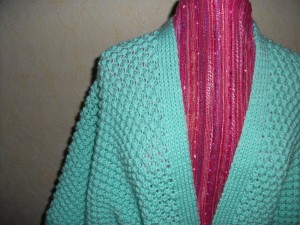 Being a glutton for punishment, I worked both front pieces at the same time on the circular needle. You need to be careful or you might find you are working on the same side over and over (I made that mistake once, and had to play catchup with my stitches on the other side. 🙁  Perhaps it was someone looking for me on ‘IM chat’ that distracted me! 😉 ). I put a stitch marker on one side and moved it up along the piece as I worked, to keep me on track. 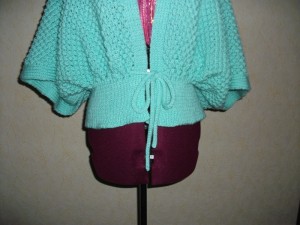 I finished with a deep rib and made a crochet i-cord (nothing to do with phones!) to run through the eyelets and tie at the front. The only joins were at the rib waistband on both sides and to join the rib band at the back of the neck. These I crocheted together, I like the finish it gives. 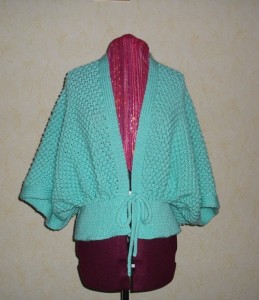 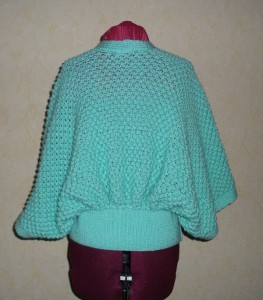 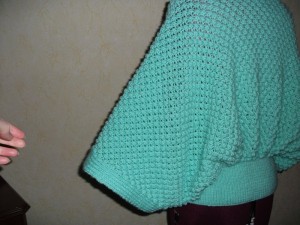 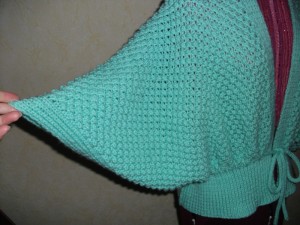 Now all I need is somewhere to wear it!

Underneath an umbrella, uncle Ultan always untidy in his usual uniform of ugly ultramarine undershirt & unbuckled  shoes, was ushering Ukulele Ulric with his unicorn on a unicycle in hand, urgently uphill.

Never out of his hand, I think the unicorn on a unicycle even goes to bed with Ukulele Ulric.

I think I’d better think this out again!!

Mix the flour, butter and icing sugar and press into a greased Swiss roll tin.  Bake for 10-15 minutes.

Meanwhile beat remaining ingredients together.  Pour over the base and continue to bake until the top is set and a light golden brown.
Cool and slice into bars. 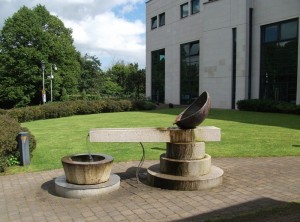 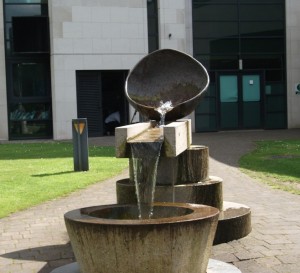 A Granite and Bronze sculpture which functions as a fountain, spilling its water to the ground.  It symbolises the making of the ‘Lagan Valley ISLAND site,’ which was formed by the existing river and the diversion of the river through the construction of the canal. 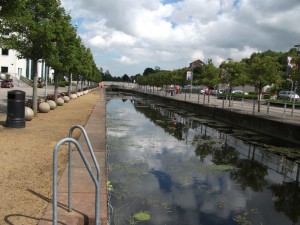 It symbolises the elements, placed outside in the open air, fire is suggested through the casting of the bronze, granite signifies the earth and the water flows from this. It is intended to be a very physical piece, even the stone has been dominated, fashioned and constructed by the artist. 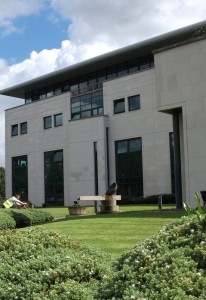 Ned Jackson Smyth is a sculptor situated in Newtownards, Co Down. He was born and educated in Belfast, and completed an apprenticeship in light engineering. He attended University of Ulster, where he achieved a BA (Hons) in Fine and Applied Art. Since leaving University he has been practising as a professional artist, through exhibitions, commissions both private and public, workshops and lecturing.

He has exhibited throughout Ireland, and internationally with group exhibitions in the UK, Europe, Russia and Brazil. His public commissions have been a mixture of community-based projects; public authority commissions; and a number of private commissions in Ireland, Europe and the USA. 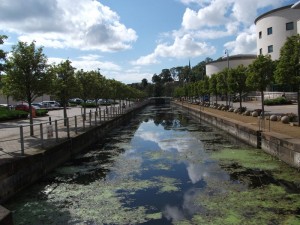 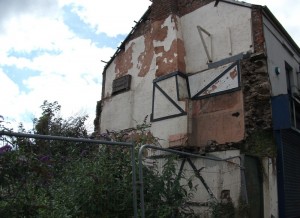 I wonder if they emptied them?

Come on, go easy on me. Drawers are openings.

Remember I have not been able to take my camera for a walk for the past few weeks. My day will come ( I had to get that in before Ramana came and said it!!).

Panicking was not encouraged in the house where I grew up.
Just as well really since there were so many critical situations to deal with along the way.

We were the ‘Come to’ house, yes, everyone assumed they had free passage to bring their troubles to our door.

My son needs shoes
We have no food
Can I use your phone
‘I can’t go alone!’
Yes! Please, I’d love some tea.

It’s a broken hip
Martha fell and split her lip
John fell down stairs
Mary had a stroke
I’d love a drink, but I’m really broke.

Screaming, shouting, ranting and railing, waste time, use energy and distract from the situation.
First responders at an accident will tell you: Those making noise are not critical, deal with the quiet ones first.

With advanced age people are more inclined to sweat the small stuff.
Noises in the night. Driving in busy traffic, or sometimes crossing the street can become like a task of major proportions.

The thought of falling, or dying while alone are often unspoken nightmares, but there is help at hand. A Personal Alarm can give reassurance that help is on hand when needed. With a Personal Alarm Service friends and family are only a button press away.

I found it amusing that the topic of Panic was chosen for us this week by the ever calm Ramana. I think you should move along in single file, with no panic, to see what he and the other active members of the Loose Blogging Consortium have to say on the subject: Anu, Delirious, Maxi, Maria/Gaelikaa, Maria SilverFox, OCD writer, Padmum, Paul, Ramana, Shackman speaks, The Old Fossil, Will Knott.