David shared a photo on Facebook. It immediately grabbed my attention. 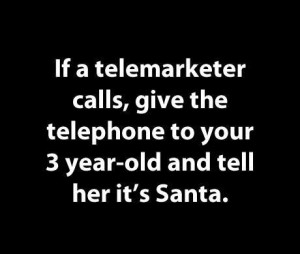 If no 3 year-old is available, hand the phone to an adult who speaks another language. Irish works well, especially when staying in France!

How do I know?

I know because I proved it while staying with Elly’s French mother, in France some years ago. She has three mothers. Some people collect stamps, my Elly collects mothers! Lonnnnng story….

We were enjoying an aperitif when the phone rang and our hostess went to answer it. Eventually she returned with phone in hand and motioned to Elly that it was a telemarketing call and no matter what she said in French the caller would not give up.

She handed the phone to Elly to see if that worked , but the caller still prattled on. Elly’s French did not seem to worry him, so she handed the phone back to French mother. She tried again and became more and more frustrated. Elly suddenly had a brainwave:

“Give the phone to mum and she can talk Irish!”

Now my ‘Irish’ is not the best, but I figured the caller would not notice. I began muttering away in a rather stern voice. I talked the greatest load of rubbish and when I ran out of sentences, I began all over again. Elly was splitting her sides laughing at me by then.

Bingo!  The caller hesitated long enough to ask, in English, what language I was speaking. “Is it Turkish” was his first suggestion, but I never pretended that I understood and kept on with my prattle. I was beginning to enjoy myself but finding it hard not to laugh.

Eventually he grew tired, gave in and hung up.

At home on occasions I have set the phone on the counter beside the radio and turned up the volume. Having done that I would go and do a chore at the other end of the house. The caller was paying for the call and not me, so keeping the line open prevented them using the line to annoy someone else.

Nowadays, my number is unlisted in public directories, so I manage to avoid the sales calls. I do from time to time get a wrong number where somebody has miss dialled.

The Last caller asked “Is Joe There?”

“I’ll go and take a look.” I said noisily setting the phone down.

About five minutes later I came back and said “Hello. You still there?”

“I looked under the bed and he is not there.”

The line went dead and I was never troubled by that man again!