I read blogs for enjoyment or go to websites for information and not to be put to a test or treated like I am a robot or terrorist. If you want me to visit your blog and comment, then make it easy to do so and do not put barriers in my way. In other words make me welcome. I wonder how many visitors have turned on their metaphorical heel because of them?

Using a CAPTCHA involves looking at an image which consists of some distorted text before typing the two words that we see in a box. Today I took a sampling of a few to prove my point. They are on the image attached. 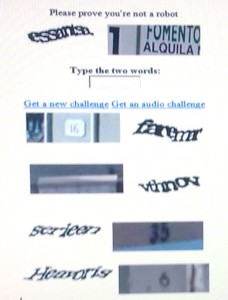 Five samples. The request is always the same: ‘Type the two words’.

Not everyone that uses the internet has 20:20 vision, some of us have embraced the silver circle and with that privilege comes the hurdle of reading small, faded or distorted print. Alas, users with poor vision or no sight at all cannot solve these problems, so an alternative called the Audio CAPTCHA has been developed. Easy, you would think?  No way. In this kind of test, the user must listen to a GARBLED voice and identify the numbers or words that are being spoken.

Computers and the internet have opened so many doors for the visually impaired these days, allowing them to play a full part in the workplace and in social media.

I heard two complaints about these audio CAPTCHAs in recent weeks. Firstly my friend Darragh Ó Héiligh otherwise known as Digital Darragh was saying how difficult it was to understand a particular audio CAPTCHA and even his sighted girlfriend Emma, found it impossible to help him.

The second case was during In Touch, a BBC Radio 4 programme hosted by Peter White, with news and information for blind and partially sighted people. A blind listener phoned in to share his frustration on accessing a Government website about disability payments in the UK. He did manage to fill in forms online, but needed to use an audio CAPTCHA that was impossible to understand. He had nobody sighted with him at the time to help.

Do you think it was the Government’s way of reducing figures for those who require help?