If you are going to a Halloween Party tonight, enjoy it. BUT…. 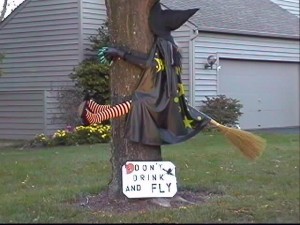 Is this how my eldest brother sees me? He sent it to me.

Though the origin of the word Halloween may be Christian, the holiday is commonly thought to have pagan roots. In Ireland it is more typically linked to the Celtic festival of ‘Samhain’ which comes from the Old Irish for “summer’s end”.  All Hallows’ Eve preceded All Saints’ Day also known as All Hallows on November 1st and All Souls’ Day on November 2nd.

The souls of the dead were said to revisit their homes at that time, so feasts were prepared, at which the souls of dead kin were beckoned to attend and a place set at the table for them.

In my young days we always set an extra place at table for the visiting spirits on All Hallows’ Eve, my father was of a very superstitious nature, but I never heard tell of any departed souls actually joining us in our meal. If we had any living souls (unexpected guests) join us for that meal, other places would be set for them.

Halloween costumes are often modelled after supernatural figures such as monsters, ghosts, skeletons, witches, and devils. Over time, that theme has extended to include popular characters from fiction, celebrities, and even ninjas, robots and princesses.

Be very careful if you are out and about, you might just bump in to some weird characters!