#16 – Enter a writing contest. Anyone know of a contest that calls for no more than 100 wurds?*

I am not a writer, I have a fear of the blank page… memories of scratchy dip pens, ink stained fingers to my knuckles and large black blobs making my writing almost indecipherable.

Nancy’s Challenge was right for me, show her my writing desk.

Anyone know how to get a picture of the inside of my head? 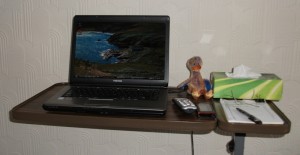 Where I go, my desk comes too! 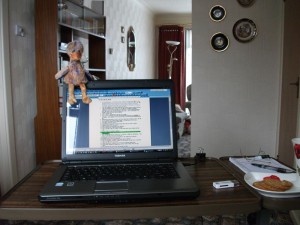 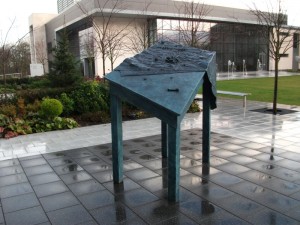 The different levels of the table set me thinking… Youngsters were barely into double figures when they began their working lives, the tables & machinery must have looked so high to them. As the years passed the children grew up and the tables and machinery down. 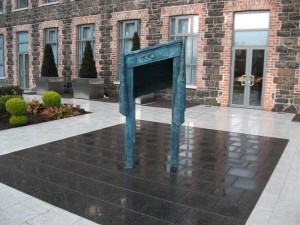 This sculpture at Mossley Mill, Co. Antrim is a bronze table draped with linen cloth with detail including a cross section of the Borough. The cloth is symbolic of both the industrial past and the theatrical future of Mossley Mill. The building in the background is now a museum telling the story of the Mill. 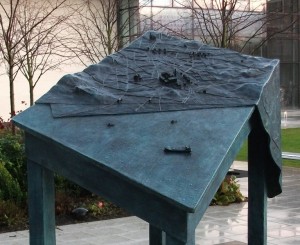 Tabletop draped with linen showing a cross section of the local map and the Mill in high relief. The ship is in Belfast Lough possibly transporting the linen goods to foreign shores.  Do you have very old damask linen cloths, I wonder if this is where they began life? 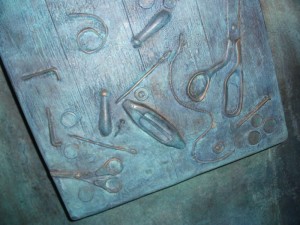 One of the overhanging sections shows ‘tools of the trade’ scissors, shuttles bodkins, buttons and threads, needles and pins.

Chris Wilson was born in Glengormley, Co.Antrim, 1959. His education took him to Brighton Polytechnic where he gained a B.A.(Hons) Fine Art. He then returned to Northern Ireland to complete his studies and was awarded an M.A. Fine Art,  at University of Ulster.

Chris has this to say about his work:

My practice has involved the exploration of locations through the use of maps. The locations include interior spaces and landscape. The maps are used to create references to location both metaphorically and symbolically and to provide the basis for explorations of space. The significance of maps with their territorial references are used to investigate the illusion of three dimensional space created from materials normally read as flat. Particular works including ‘mountain’ employ multiple perspectives and opposing view points.