I turned up on time, then sat to wait my turn.

There was no point on dwelling on the fact that my tummy was gurgling for want of food. I would not be long, so all I needed was a little distraction. Out with the blankety- blank notebook and pen… 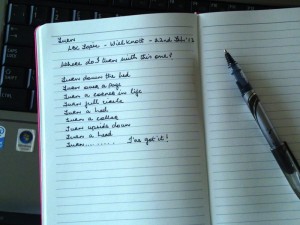 I had to take a photo of the page when I came home, otherwise you would never believe that I could write!

Just as I decided on my angle for the topic, my name was called. It was time to visit the vampire for the battle with my veins. Soon the fasting bloods were taken and I was hopping back into the car for the drive home and a welcome breakfast. 😀

So what was my eureka moment?

The tune ‘Something Good‘ – from the soundtrack to Rodgers & Hammerstein’s 1965 film ‘The Sound of Music’, was gently playing on the piped stream throughout the public areas of the building.

With apologies to Rodgers & Hammerstein, I began adding my own words to the tune and they suddenly involved turning….

For here they were, standing there, no good to me
Whether or not they should
So now they’re in the box at my kerbside
On the way to do someone good

This will show you how my waste is turned into something good.

It is not all MY waste. HONEST!

Bryson Recycling is owned by the Bryson Charitable Group, one of Northern Ireland’s leading social enterprises. Bryson launched a pilot kerbside box collection service as far back as 2001, it covered 8000 households at that point. The service has been extended significantly, and the company is now providing a box collection service to more than 170,000 households in Northern Ireland.

They have also added a commercial collection service, which is now used by over 600 businesses and schools.

The topic Turn was chosen for us by Will Knott and I hope he has not gone for recycling! 😉 Maybe he will surprise us with one of his clever posts this time. So why not tip toe on over to check out what our other regular contributors have turned up for our pleasure: Delirious, Maxi, Maria/Gaelikaa, Maria SilverFox, Padmum, Ramana, Shackman speaks, The Old Fossil, Will Knott.