I went walking & exploring with my camera on my last visit to Elly & George. I found a man at work: 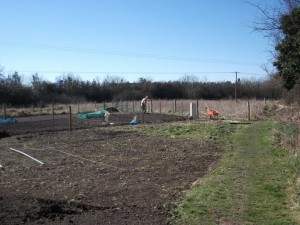 A man at work 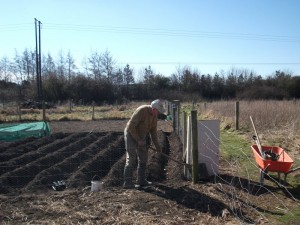 On chatting I discovered this man was called John. The day was bright but there was a bite to the cold air all around. The ground was cold and John said he was a whole month later this year in planting his spuds. The other allotments around him had a neglected look, the owners not ready to venture out following the severe weather of the past months.

Wandering further, I discovered something unusual. 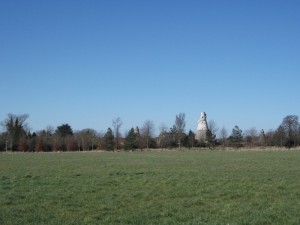 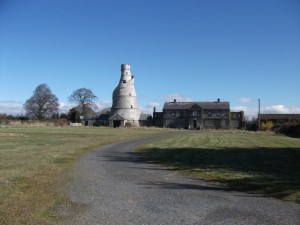 This Wonderful corkscrew-shaped barn was built in 1743 on the edge of Castletown House Estate, which borders Leixlip and Celbridge, Ireland.
The stairs ascends around the exterior of the building and it is flanked by two smaller dovecote towers. 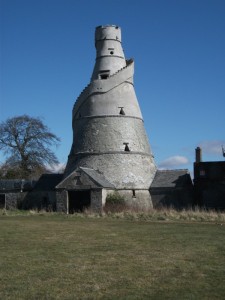 The Barn itself stands approximately 22 metres in height, and has a tapering cone, encircled by a cantilevered staircase with a crow’s nest viewing gallery. A central hole through each of the floors supports the generally accepted theory of its use as a granary. 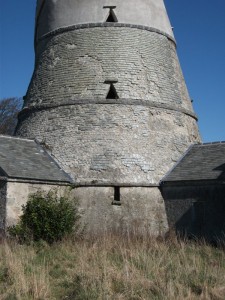 Alas, the barn is now in a dilapidated state due to vandalism and the entrance is blocked. 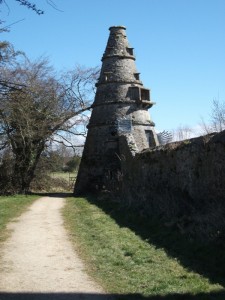 One of two dovecotes beside the Barn 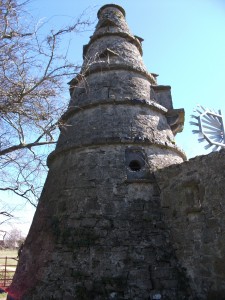 The work was commissioned by Katherine Connolly, widow of William ‘Speaker’ Connolly. He had made his fortune from land transfers, following the confiscations by the Crown of lands belonging to supporters of James II after the Williamite War ended. He had the first Palladian Mansion built in Ireland – Castletown House near Celbridge in County Kildare.

William Connolly died in 1729 and was said to be the wealthiest man in Ireland at the time of his death, which left Katherine an extremely wealthy widow. There had been a severe famine in Ireland in 1740-41, she kept the local people employed working on projects like The Wonderful Barn.

There was talk of building a housing estate on the land about the barn, during the years of the Celtic Tiger, but thankfully that idea was shelved and the locals make great use of the space to exercise their four legged friends and enjoy the great outdoors. I must have talked to at least ten different dog walkers on my wander about.