My earliest memories are the long sun filled summers of childhood, when I was kidnapped in the closing week of the school term, to become an only child for a couple of months in Sligo on the west coast of Ireland.  My uncle and aunt returned me to the fold at the beginning of September, an inch taller, dappled with freckles and a more glorious glow to my hair, all the benefits of long hours outdoors and the locks being washed in Mr Clark’s rain water.

Mr Clarke lived next door to my aunt & uncle. He collected the rainwater in a water butt, long before it became fashionable. He used it for his vegetable garden, wonderful soft water unlike that in the taps. When My hair needed washing, a couple of kettles worth were collected and heated, to wash and rinse my golden tresses.

When I hear mention of peas…. I am down among Mr Clarke’s rows of peas that stretched up above my head and the bow on top of it. Picking the peas, opening the pods and eating them right there. Close my eyes and I can still taste them! Is it any wonder that I never liked Marrowfats.

Looking out the bedroom window and seeing, hearing and almost smelling the cows in the field at the end of the garden. Late in the afternoon the farmer would arrive round the doors with churns of his still warm milk for sale. No pasteurising, bottles or waxed containers back then, You brought your clean jugs to the roadside to be filled. It was about the only time I made myself scarce, the smell of the warm milk turned my stomach.

Walking to Mrs McGarrigle’s front room shop, for eggs, If you wanted half a dozen, you might get four with the promise of the remainder when the hens out the back laid them. The eggs were warm with an overcoat of henrun still attached.

Carefree days, making toffee in Lamb’s kitchen, testing it for setting point on a saucer. It set. The only way to remove our prize effort was with a hammer!

Lamb’s became my second home in Sligo, if and when I missed the company of the household I left behind me in Dublin. They lived a few houses away from my aunt and uncle. A family of three boys and a girl, much like my own. They adopted me and I was included in all that went on – even the evening recitation of the ‘rosary’ with the ‘trimmings’ at the end of it that lasted almost an hour. It was enough to give me housemaids knee! 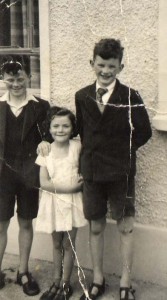 This 1952 photo looks as scarred as our knees!

We would cycle up the byways of Knocknarea to pick mushrooms in the evenings, being careful not to step in the fresh cowpats, as we collected perfect white domes for our breakfast table.

Carefree days between 1952 and 1957 when we were allowed to roam and cycle around the countryside, or into Sligo town to go to the cinema. We spoke to every person we met along the way, there was no such thing as a stranger.

I feel sorry for the children of today who are chauffeured and chaperoned everywhere they go and anything they do MUST cost money.