To house all my refuse and recycling bins. Over the years these have grown in number and sometimes in size.

When I came to live in Northern Ireland almost thirty seven years ago. we had a large tub shaped refuse bin made from a very strong moulded rubber/polyurethane? material. It had a lid that you twisted to lock it in place.

In the early to mid 1980s our local council provided us with a large grey wheelie bin for our household rubbish. With that change, we had to wheel out our own bin to the kerbside. Not a problem for us, but say you lived on a farm with a two mile lane to the roadway, you still had to wheel the bin all the way to the road, come hail, rain, potholes or blizzard, if you wanted it emptied.

The wheelie bins had many advantages.

Next came a smaller version in blue. This was our first official attempt at recycling and it was for newspapers and magazines. No envelopes.

I had already been recycling paper and glass for some years myself. Kerbside collection made this much easier.

A few years later we were provided with another large wheelie bin, this time in brown for our garden grass & hedge cuttings or the cut up pruned branches of trees. We did have the option of buying a compost bin to compost our own garden waste.

The side of our house was becoming very colourful. 😉

The next change was to take away our blue paper bin and replace it with two boxes, one red and one black with lids that clicked into place. These were our new recycling boxes for a limited group of recyclable items such as glass  bottles and jars, paper and some plastics. They also took some cardboard but it needed to be no larger than the size of the box. My faithful old Stanley knife has come in handy over the years! You needed a brick to stop the lids blowing off or the boxes from blowing down the hill.

Boxes were emptied once a week, on a Wednesday and the wheelie bins  moved to Friday, every second week.

Next came a kitchen caddie with corn starch kitchen caddy bags to line it. The caddie was for vegetable and fruit peelings at first, but later we were encouraged to add any waste food eg, plate scrapings and bones. Now it includes both cooked and uncooked food waste. These go into the brown (garden waste) bin. We were provided with a large red tag to attach to the handle of the brown bin when we need the caddie liners and a new bundle is left with our empty bin.

Now thanks to another EU ruling to reduce our general waste, the wheelie bin is being replaced with a smaller size model, so I expect it to arrive any of these days.

There is a push for more recycling so a new three tier wheelie arrived last Thursday in the pouring rain. It stands over four feet high and bulky enough to remain outdoors. 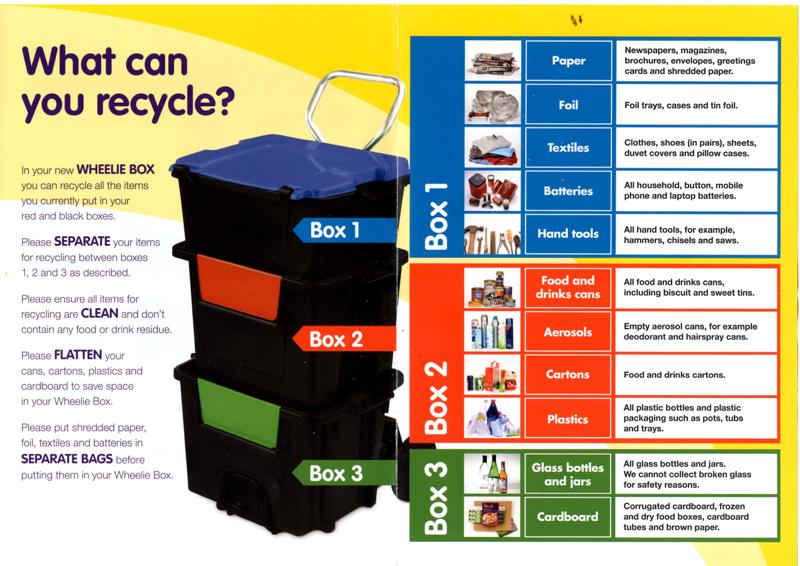 This leaflet came with it explaining what goes where.

Already I see a problems.

The previous boxes sat into each other for storing and I kept them dry in the garage from week to week only filling them every other Tuesday evening.

The boxes on this new contraption do not fit inside each other for storing. The top box has a lockable lid but the other two boxes do not and there is a gap all the way round so the rain can get in. Cardboard goes in the bottom box, and means it could be quite soggy by the time it is collected.

We are allowed to hold on to the old red & black boxes to use for overflow or excess of a particular item e.g: bottles or drinks cans…. after a party.

I have not put my Kerbie boxes out since the third week of January. Last night I sorted out all the items I had collected over that time and placed them in the new 3 tier stack, it was less than half full. I can see my neighbour across the road making use of any spare space in my boxes in the future.

Speaking to my local Councillor this morning, he reminds me that the Council are paid for all the recycled items by weight, and hopefully it should help to lower the rates bill for all householders!

They do not take gift-wrap, posters, or greeting cards with glitter on. Something to think about when making a purchase.