I had the honour of joining a walking tour of ‘Walking the Bridges of Dublin, hosted by one of my wonderful Toyboys, Anthony Mc Guinness. Anto and Dublin City Council are responsible for the Bridges of Dublin The website is all down to Anto and the time, energy, research and love for the subject in the project came through loud and clear during our tour on Saturday night.

The River Liffey rises close to Kippure in the Wicklow mountains. It flows for around 125 km (78 m) from source to sea through counties Wicklow, Kildare and Dublin before entering the Irish Sea at the midpoint of Dublin Bay. There are in total 24 bridges that cross the river.

Our walk covered fifteen, with added information of those we did not see.

We gathered at Rory O’More Bridge, often referred to as Watling Street Bridge. Building began in 1859 and it was declared open to the public in 1861 and crosses the River Liffey from Watling Street, on the south side to Ellis Street to the north side of the city. It is in fact the fourth, or possibly fifth, bridge at this location since records began. Dates of two of the previous structures: 1670 & 1704.

When a bridge was first built on this site, it was a wooden structure, much needed by a growing city only served by a single bridge and it often in a state of dilapidation. In the photo below you can actually see a line of wooden stumps from former wooden foundations. 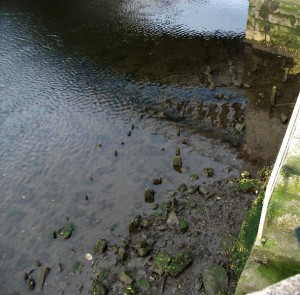 A single span bridge with a cast iron deck, built in St. Helen’s Foundry in Lancashire, England. The original, estimated price was 7,556 guineas, but rose to 11,000 guineas on completion. Can you imagine the large structure floating up the Liffey on a barge, before being lifted into place, by MANPOWER and not the modern machinery we have today.

We continued our walk along the quays, stopping at each bridge to hear the story behind it and sometimes crossing over the bridge to take in some detail, find a space large enough to hold twenty of us without causing obstruction to passers-by or the moving motorised traffic. The journey from Watling Street to our final destination and watering hole was 5 km.

At this stage, the evening was cooling down the closer we came to the coastline, legs grew tired and Anto’s whistle needed wetting, so we adjourned to the Ferryman pub at Sir John Rogerson Quay.

In days gone by the Liffey Ferry crossed the river at this point, transporting workers from North to South of the river to work in the Gasometer, the Banana Factory and Dublin’s ship building yard. As recently as the mid 1980’s Guinness boats carried barrels of their famous brew past The Ferryman.

I thought I knew the city of my birth, having grown up in the days when I needed money for nylons or tights, I walked everywhere instead of waiting for buses that knew not a timetable. You know the story, no bus for an age and then three come together!

Since I moved North thirty seven years ago, traffic has changed direction along the quays several times and five new bridges have been added with a sixth due to be unveiled tomorrow and open to motor traffic on Wednesday.

I will include some of my photos, the flotilla was an unexpected surprise and we were close enough to chat to the people on board the various water-craft. I have just realised that I have no photos of O’Connell Bridge. It was busy and broad, so difficult for me to take a good photo. Maybe I was too busy chatting to remember. 😉

For more information, and professional photos please check out Anto’s website link above.

*1 Liffey Bridge is foot bridge. In the beginning there was a toll to reclaim some of the building cost, so it became know as the Ha’penny bridge and the name stuck. In Dublin, we like our nicknames!

15 thoughts on “Walking the streets with no rain!”