It was on the firm flat 5 km beach called Dollymount Strand on Bull Island. The island was located on the northern end of Dublin Bay. The island is connected to the mainland by the Bull Bridge, a one-lane wooden road bridge. In recent years, access by car is limited to a portion of the island near the Bull Bridge and two sections reached from a causeway road at Raheny.

I was just seventeen and daddy was my tutor for the day. He showed me the clutch, break and accelerator and how to change gears. Then pointing straight ahead he said:

I always liked playing with fabric. My father worked in the ‘rag’ trade – not selling rags, but fashion fabrics. Latterly he worked his agency from home, so we were surrounded with texture, colour, and types of fabric that would be on the streets, at least six months down the road.

When the new season’s samples arrived, mammy and I would spend several evenings helping daddy to record the details of each fabric blanket in his little black book. There might be up from twenty to forty colour-ways on the one blanket. Occasionally we drifted into conversation:

Me: I would love a dress/skirt/coat in this colour.

Daddy: If you would sew, I could get you the fabric.

Me: If I had a sewing machine I would sew.

Daddy: You will have to wait until you leave school, for a sewing machine, You do not need any distraction from your books. (Somehow helping him was not seen as a distraction!)

The morning after I finished my final exams, my first ever sewing machine was delivered to our house. It was a Brother straight stitch. I was in heaven. By the time daddy came home for his dinner, I was wearing a new fully lined sleeveless dress! That machine cost all of £24 sterling and well paid for itself, with the dresses, tops, trousers, suits and even a tweed winter coat that I made during the twelve years I had it.

Nowadays it would be called a School Prom.

Unlike today, our school Formal Dance was held after we had finished all exams and the final term completed. We left school in June and the dance was in September. The evening consisted of a dinner and dance in an hotel. I no longer remember which one or if it still exists. There were no gatherings in the hours before the event, parents stayed at home and each couple arrived on their own. When the dance was over we returned home, often around midnight.

I spent a couple of days making my own full length dress. A princess line in a beautiful shade of blue with a motif, Dupion fabric.

My beau for the evening was Ray, a regular visitor to our home, a part of the gang and good friend. We had a Dress suit/tuxedo in the wardrobe for the use of all the lads in turn. I offered it to Ray for the evening, He might have been working and studying at night, but pennies in those days were hard come by. He accepted my invitation and offer of the suit.

On the night in question, he arrived in the suit and bow tie, with an orchid and the biggest box of chocolates that I have ever seen. It was the shape of a casket with six tasselled drawers. It became my first work box for sewing! 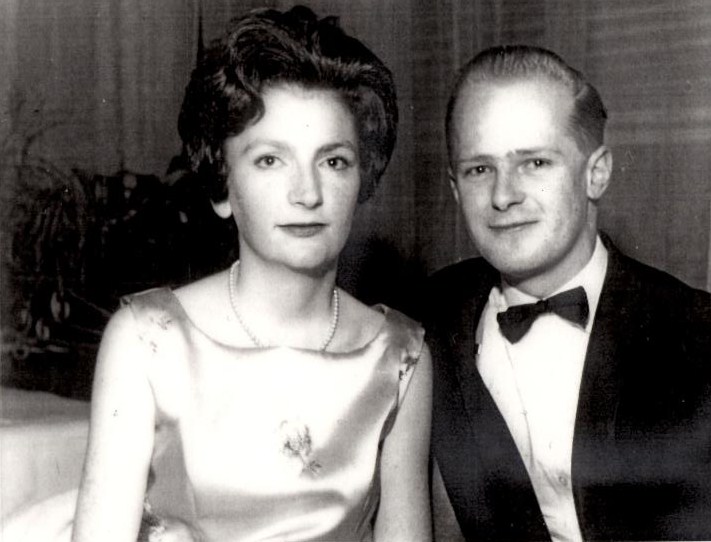 We had great fun and we are still friends to this day!

16 thoughts on “A few more Firsts”