This time I am not talking about you Anders, I am in the mood for food.

Deep in concentration on my crochet the other week at Parlour Yarns… I realised the conversation had turned, as it often does, to food. Suggestions for dinner were asked for or shared. I cocked my ear to listen more intently.

They were talking Turnips of the Swedish variety. It is often known as yellow turnip, Russian turnip, or in America, rutabaga. In Scotland it is known as ‘neeps’.

I never knew it was a member of the cabbage family.

My only problem is cutting off the root, then peeling, and cutting the tough flesh into chunks.

It appeared on our table regularly while growing up, always boiled in chunks.

Jack liked it boiled with the potatoes and mashed – I now use it this way for the roof of my Shepherd’s pie with a little sprinkling of crushed crisps to finish it off.

Back to the Parlour…

Ray had the floor and was describing a simple way to produce wonderful golden yellow flesh without any peeling or chopping!

“No need to wash or peel it”. She intoned. “Bung it in the microwave and cook it for 20-25 minutes and there you have it!”

When the laughter stopped someone asked how you knew if it was cooked?

“Stick a knitting needle in it!”

Jennifer, agreed that it worked well and I don’t think she had the sale of more needles in mind. 😉

Well, you know what is coming… I had to give it a try. I pulled out the swede/turnip from my Vegetable box. 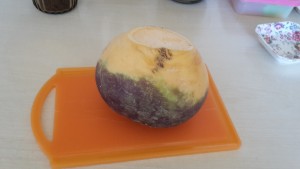 I weighed it 900 grs. Placed it on a plate with a layer of kitchen paper over the top, set it in the Microwave ( mine is an E 1000W) on High power for ten minutes… I did not want any explosions. I tested it with a metal skewer at that stage and decide it did need more time. Two sessions of five minutes later (Ray was right!) I lifted it out onto the counter and let it sit a minute. There was a bread knife on the counter and I lifted it and cut the turnip in two as easily as a loaf of bread. 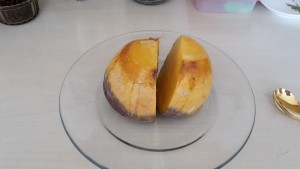 The flesh was soft but not soggy. I spooned it out onto the plate and it mashed easily with a fork. 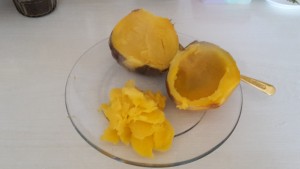 There was more than one helping for me so I bagged the remainder and froze it. I had it yesterday with dinner and it was perfect.

I’ll do it this way in future, No struggling to peel or chop the raw turnip and the cooked shell of skin is as soft as a coarse baked potato skin.

17 thoughts on “Food Monday ~I am partial to a Swede.”