I think I told you that I might be busy this week. Well, that is a bit of an understatement. My little car and I had a long drive on Saturday, only arriving at my first lodgings in the early afternoon. The landlady was at the door to meet me with a very welcoming smile. Out she comes to the car, taking a wee nosey into the back seat, and asks: “Do you want to unpack now, or lock up and have a cup of coffee first?”

I had two bags on the back seat of the car, so I said I would bring them in with me and leave the rest for later, safely locked in my boot/trunk. One of the bags on the back seat had been driving me crazy for the past couple of hours of my journey, so much so, that I nearly pulled off the road to devour a fresh loaf of Veda bread, a malted bread sold in Northern Ireland. In another cake box was a still warm experiment (cake)* that I had made that morning. I needed to open the box and allow it to cool properly for an hour.

So, I was welcomed indoors. Before I had reached the kitchen with the goodies, yer wan, the landlady, says to me: “I have a job for you”.

There was I thinking I was on my holidays. I’m telling you, I nearly took my three loves of Veda bread and one hot cake back to the car to find another guest house for the duration. But the other residents pleaded with me to stay. They danced rings round me and told me not to go. So I took pity on them and stayed. Over the very welcome cup of coffee, which came with Danish pastries, I was told about the job in store for me.

On one side of the kitchen was the greatest collection of saucepans/pots lined up in a row. On the opposite side were eight bowls standing like soldiers on parade, lined up from the largest to smallest. It almost looked like a factory production line. The largest bowl was covered and I realised it had a wooden spoon under that cover, my beady eye saw the handle sticking out. I also noted the new box of greaseproof paper, a scissors and a large ball of string and a bottle of Guinness! Now, being the month of June and not yet the longest day of the year, I was a little confused. Had my long drive brought me forward in time as well as miles? It could not be October already – The sun was shining! A mighty army of pots, boiling kettles, bowls and the other paraphernalia could mean one thing: Puddings. Christmas puddings.

Yes! I got it in one. My landlady, I discover, had never actually made Christmas puddings from scratch before in her life. Why would she, since she was the baby in the family and she had a mother & big sister who chopped the peel and grated the breadcrumbs and half their knuckles with it, every winter in order to feed the hoards on the big day, New year’s day and don’t forget the pudding for St Patrick’s day as well. So here was my landlady, read sister, attempting the puddings for the very first time. She had mammy’s no suet pudding recipe, and had it almost ready.,

“The whiskey is in.” says she, “But I was not sure about the Guinness, I have no idea what consistency the mixture should be.”

I gave the mix a stir and said: A pudding mixture should be much softer than a cake, so pour in about a third of that bottle of Guinness and we will see how it feels. Remember, any remaining stout is for the cook! She poured and I mixed, I let her have a go so she would get the feel of it. We added a little more, not as much as last time and it was right for our quantities. Eileen was using double the ingredients of mine in the link above.

We filled the seven greased bowls (she worked, I supervised) leaving space for expansion. I showed her how to prepare the greaseproof covers with pleats in, and how to tie them well before adding a handle. Fair dues to the sister, making puddings on a warm sunny day was not so daft after all. The windows and doors were all open and the extractor fan did the rest. It was possible to put them on to boil, set a timer and go off to enjoy the garden. By dinnertime, four of the pots were ready to come off. 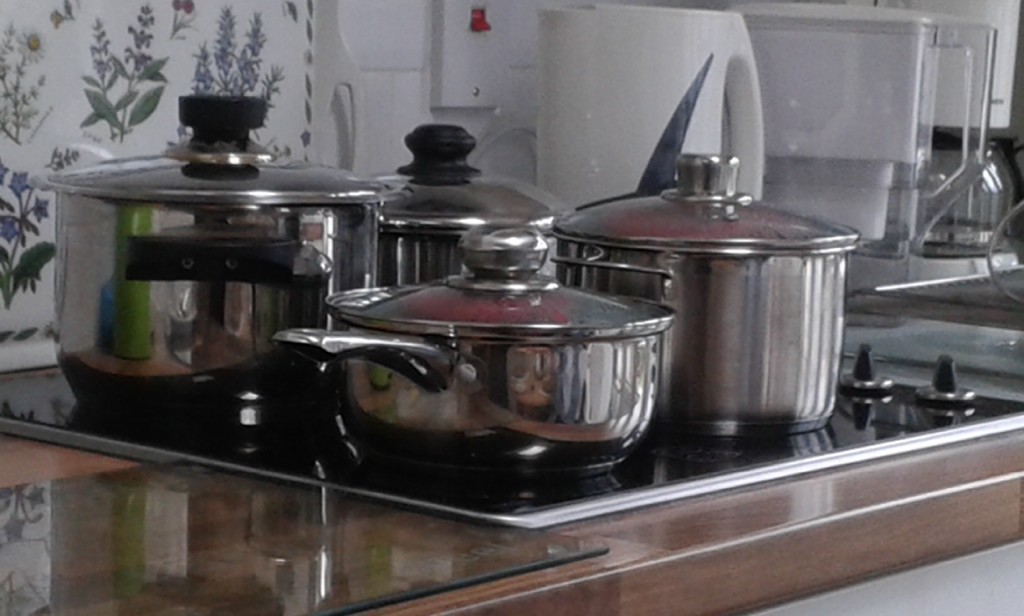 The baby one, read tester, was ready to eat for dessert – part of mammy’s tradition. 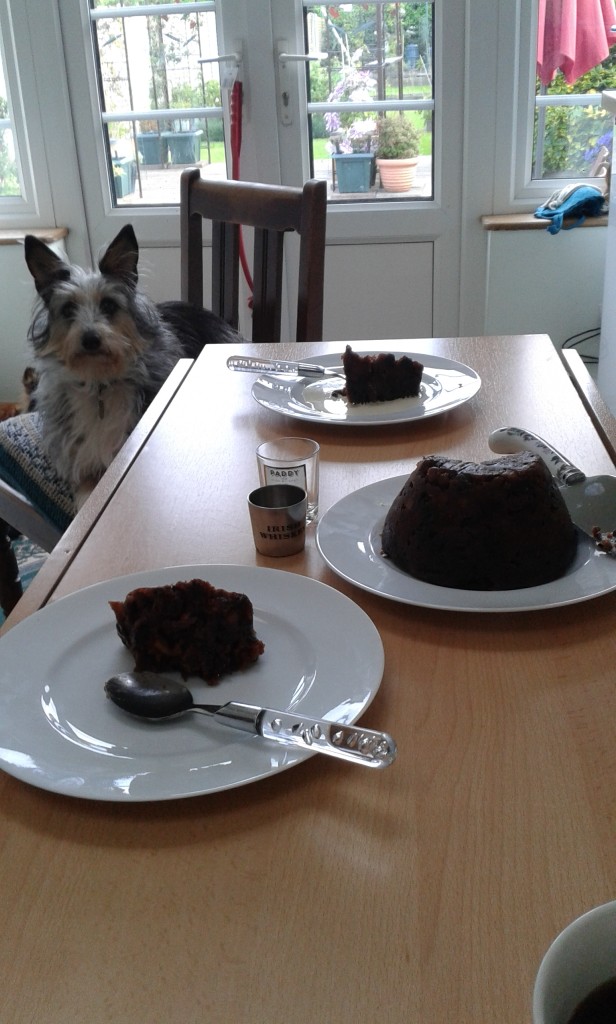 The other three would be cooked early the next morning. And all would be given another boiling closer to the day they were needed.

* The cake experiment was a variation on my Lemon drizzle cake.  You can find that recipe under cakes in the Recipe page up in the Header Bar. This time, I made the mix as normal and when putting it into the baking tin, I dotted small spoonfuls of lemon curd randomly between the cake mixture.

I am a mammy cook. I have no professional training and my collection of recipes has grown with each year I have lived. In my young life we used pounds, shillings and pence for money and pounds (lbs) and ounces (ozs) for cooking. I was never quite happy with the move over to grams! My weighing scales has a clock type face with both sets of measurements. So when a recipe appealed I copied it as it was given. So long as I kept to one or other measurement not mixing grams with ounces I was fine.

So some of the older items will have Lbs and ozs, while the others will have grams. I am not into translations and conversions.

I located the following weights and measures conversion table. It was in Prima magazine about 15 years ago. I hope it is helpful. 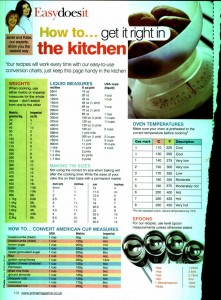 Under the title of each recipe will be the oven temperature is set for ºC which I use in my fan oven. The number of servings will appear at the base of the recipe. I will use only the recipes that have made a regular appearance at my table.

Steph from The biopsy report is a steadfast and witty commenter here on my blog. I am not sure that she has forgiven me yet for scaring her cat the other day. In the hope of making amends I will officially unveil my Food Mondays with the lemon drizzle cake she asked about.

Butter a 2lb loaf tin and line with baking parchment. Place all the cake ingredients in a bowl or mixer and beat for 3 minutes, until well blended. Pour into cake tin, smooth top and bake for 45 minutes. Remove and leave to cool in the tin on a cooling rack. Gently warm the lemon juice and icing sugar in a pan until sugar dissolves. Prick cake all over with a fork and spoon the warmed lemon syrup over the top. Leave until cake is cold before turning out. Serve sprinkled with icing sugar.